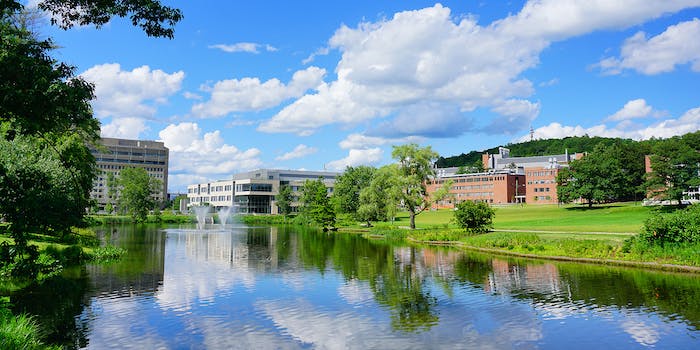 'We cannot imagine the pain, hurt, anger and exhaustion you are feeling.'

A series of anti-Black hate messages have been circulating on the University of Massachusetts Amherst campus, according to numerous screenshots shared across social media by Black students.

Earlier this month, a long email with anti-Black language was sent to Black student groups at the university from a sender named “Derek Vinn,” which seems to be a pseudonym. Since that email surfaced, a student group for men of color received similar anti-Black messages in responses on one of its online forms.

“We look down upon you,” reads a part of the email, which also makes racist comments on the IQ of Black people, a highly contested issue, African American Vernacular English, and the physical features of African Americans.

The email questions the “merit” of admitted Black students, claiming that even professors and TAs feel that Black students don’t belong. “I am sure you can see it in their faces and behavior towards you,” the email reads.

The email was signed by a so-called “UMass Coalition for a better society.” While it remained unclear who sent it as of Thursday, a part of the email identified the senders as “white people, Asians, Hispanics.”

The Daily Dot is not publishing any more direct quotes from the email due to its explicitly anti-Black nature.

Civil rights lawyer Ben Crump shared the content of the email on his Instagram account on Sunday and said the rise in anti-Black sentiments at the university is “repulsive.”

Since Crump’s post went viral, a student at Boston University who was also raising awareness about the issue has shared screenshots of another racist online hate-speech incident.

Amarri Rosa shared screenshots of responses to an application form for candidates by The Brotherly Union, a student group for men of color at the university. Rosa did not respond to the Daily Dot’s request for comments.

The responses included the N-word and claimed Black parents “afforded to never work,” referencing the unsubstantiated myth that those on welfare, often disproportionately African Americans, get free money from the government. Not only is this claim untrue, but research also suggests the welfare system has in fact only benefitted white Americans while discriminating against Black Americans.

The screenshots were not available on UBU’s Instagram page on Wednesday. It is not clear when the responses came in, and the Daily Dot has reached out to UBU for further clarification.

Since the comments were posted online, some, though not all, students have denounced it.

The Asian American Student Association at UMass Amherst shared a statement on its Instagram page on Sept. 28.

“We cannot imagine the pain, hurt, anger and exhaustion you are feeling right now,” read a part of the statement addressed to the Black students. “AASA refuses to turn a blind eye.”

“We must not be complacent in matters regarding blatant discrimination and racism,” the statement said.

The Daily Dot reached out to six admin members of the UMass Amherst Indian Students’ Association but did not hear back at the time of publication. The group has more than 3,000 members.

Black students at the university make up the least of all ethnicities, with only 5% of the study body being Black. White students make up more than 60% of the population.

On Sept. 28, the university’s Instagram page shared a statement about the incident, including comments from the University of Massachusetts Amherst Chancellor Kumble R. Subbaswamy, who called the email “contemptible and cowardly.” According to the post, Subbaswamy said the university is working with a cyber security firm to track down the person(s) behind the email.

The Daily Dot has reached out to Subbaswamy for comment and will update this report if he responds.