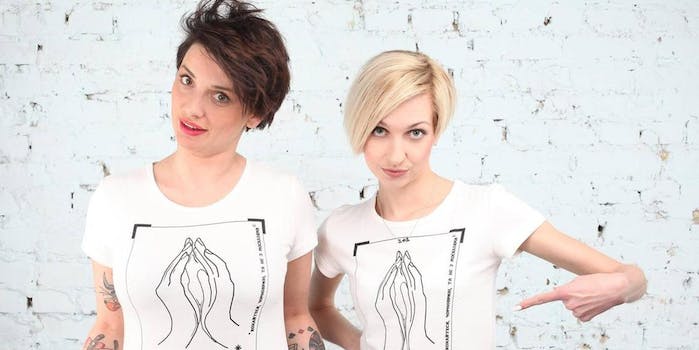 It's the most effective form of political protest we know of.

Perplexed by the current situation in the Crimea? You’re not alone. Fortunately, these Ukrainian women are trying to help clarify the situation by putting it in simple terms we can all understand. They’re orchestrating a sex-boycott campaign against Russian men.

Titled “Don’t give it to a Russian” (accompanied by a slogan of two hands clasped together, suggesting a certain part of the female anatomy), the campaign is part of a larger effort to boycott Russian-made goods in protest of the Russian occupation and annexation of the Crimea. According to Global Voices, the slogan comes from a verse by the 19th-century Ukrainian poet Taras Shevchenko, which urged lovely maidens to “fall in love, but not with the Moskaly [Russians].”

“Don’t give it to a Russian” started making the social media rounds in Russia, after an image of much-lampooned opposition leader Valeriya Novodvorskaya wearing a T-shirt with the slogan went viral on Twitter.

Translation: “With one photo, Valeriya Novodvorskaya has killed the entire Ukrainian sex-boycott at its core. :) ”

As it turned out, the image was photoshopped (it’s from a 2013 interview with Novodvorskaya), but another image of two women, Katerina Venzhik and Irina Rubis, wearing the shirts has also circulated on Facebook. Venzhik and Rubis are prominent figures in the Ukrainian media, and Global Voices reports that they wore the T-shirts to an event last week.

As is usually the case when it comes to these sorts of social media-based campaigns, it’s unclear whether “Don’t give it to a Russian” is a legitimate form of organized protest, or just a quirky stunt intended to draw media attention (either way, it appears not to have gained much ground: the Facebook page for the campaign is just a few days old, and at this time has just over 250 likes).

But of course, it’s not like such a boycott would be totally unprecedented: the concept of a sex embargo draws its inspiration from the ancient Greek comedy Lysistrata, which, while fictional, inspired real-life politically-motivated sex strikes in Colombia and Liberia, among other countries. The Ukrainian feminist organization FEMEN also called for a national sex boycott back in 2010, in response to anti-woman discriminatory policies instituted by then-prime minister Nikolay Azarov.