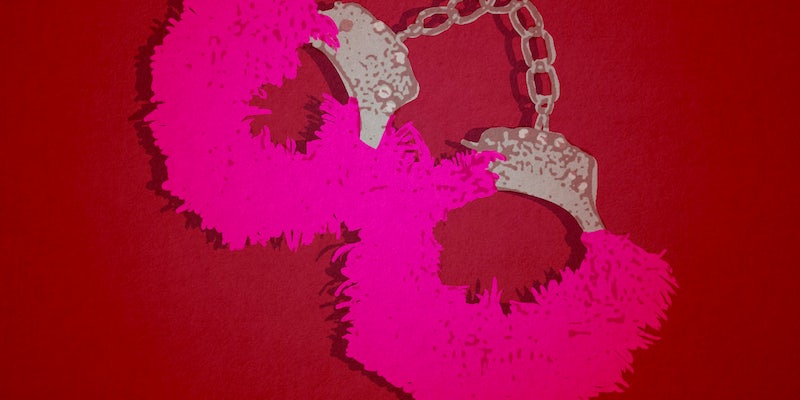 This video was at the center of a case that saw Blake’s website, Dreams of Spanking—her business and source of income—shut down, thanks to the U.K.’s updated Audiovisual Media Services Regulations (AVMS).

The AVMS regulations are enforced by Authority for Television on Demand (ATVOD), which regulates what can be shown in U.K. online video content. There is no U.S. equivalent of ATVOD; the closest regulatory body is the Federal Communications Commission, which only has power over televisual, not online, content.

It was a devastating blow to see four years’ work lost in one sweep. With heavy irony, one of the videos on Dreams of Spanking deemed unsuitable was a sponsored caning to raise funds for Backlash, a U.K. legal group that is fighting the ATVOD regulations. The other was the video mentioned above, called “Slight Damage to the Rear End.” Both videos apparently violated the AVMS rule that bans “the infliction of pain or acts which may cause lasting physical harm, whether real or (in a sexual context) simulated.”

Blake wrote on her personal blog at the time:

Depicting any of these acts would mean content was in violation of Rule 14, which dictates what material would be denied an R18 certificate, the highest possible rating under the British Board of Film Classification (BBFC) Guidelines. (This tongue-in-cheek video provides a quick NSFW guide to the rules.)

Myles Jackman, a lawyer specializing in sexual freedom and obscenity cases, added in a piece he wrote in December 2014:

Confusingly, [the banned activities] are legal to perform in real-life with consent. Yet they are classified as obscene with the highly subjective and pejorative language of ‘perversion’ and ‘degradation,’ ignoring the performer’s’ right to consent to being ‘degraded.'”

If you look at the exact sites that have been contacted by ATVOD, a pattern emerges whereby sites depicting female dominance, female sexual agency, male submission and male penetration are disproportionately targeted.

Yet Pete Johnson, chief executive of ATVOD, shrugged off any suggestion of singling out certain adult content providers. When asked whether fem-dom sites were being subject to disproportionate scrutiny, Johnson told the Daily Dot, “They’re not specifically targeted.” He conceded that “because of the nature of the material, they are more likely to fall foul of the rules.”

Instead, he claimed sites targeted by his agency “are the subject of complaints in most cases,” but went on to clarify that only two of the four providers were actually investigated as a result of complaints. Additionally, Johnson added that of 16 services found in breach of AVMS rules during 2015, six of the investigations were instigated by his agency—confirming that the regulator has a significant degree of choice over who gets investigated.

Blake’s Dreams of Spanking was effectively shut down in July 2015. A skeleton of the site still exists, but she has been forced to delete all its content. Five months after the shutdown, she told the Daily Dot that she has lost work, money, and a huge amount of production-intensive content as a result of ATVOD’s decision and that her mental and physical health has suffered.

She appealed the decision to Ofcom, the U.K. telecommunications regulator, in August 2015. However, she said she does not want to risk publishing further content on her site while awaiting the outcome.

Blake believes she was targeted by the government as a result of speaking out against the new regulations. “I was contacted by ATVOD very soon after appearing on Newsnight [a British politics/news TV show] and BBC Woman’s Hour [a British radio show],” she explained. “So it seems likely that my public criticism of the new regulations brought me to ATVOD’s attention.”

When asked for comment, Johnson would only say that the site “came to our attention through a variety of sources,” and refused to specify further when asked. He also denied that the investigation into Blake’s site was “heavy-handed,” as she has claimed.

Furie learned about her violation via “a plain recorded delivery envelope through my door with a bunch of scary looking paperwork inside which they told me I had breached four rules.” Afraid of the consequences, she complied and removed the offending video clip from her site. In doing so, she asked ATVOD to keep the details of her business with them private. As she wrote to the Daily Dot in an email:

ATVOD agreed, but then went ahead and printed a news blog featuring my case. . .and my photograph was in all the national papers. I had to move house due to the anxiety this caused for me and the strain it put on the relationship between my landlord and I.

Furie now distributes her work via another U.K.-based provider and is careful not to produce any more content that could be in violation of the AVMS regulations. Her earnings have taken a hit now that she no longer runs her own website.

Mistress R’eal appealed, taking the line that the content on her website was not sufficiently “TV-like” to fall under the jurisdiction of ATVOD. And surprisingly, the ruling went in her favor, which may set a useful precedent for other online video providers who fall foul of the regulations.

The Bondage Mistress Club website shut down following a statement from ATVOD in August 2015 that said failure to remove the offending content would result in the case being referred to OfCom, the U.K. telecommunications regulator, which has the power to enforce fines of up to £250,000 (roughly $380,000 U.S.). 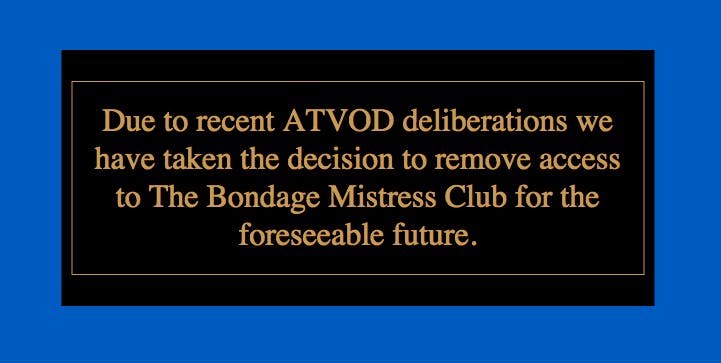 ‘A shameful waste of talent and money’

Mistress Megara Furie agreed, characterizing the results of the AVMS regulation changes as “a shameful waste of talent and money.” She continued:

One wonders whether that may be been the intention all along.