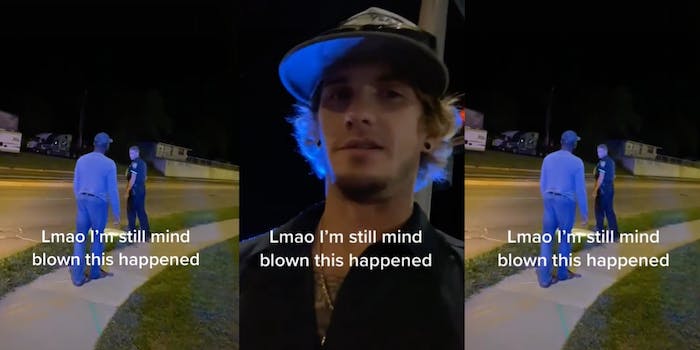 ‘Gets an Uber and still got pulled over’: TikToker films Uber driver seemingly undergoing sobriety test

In a viral TikTok video, an individual recorded his Uber driver seemingly undergoing a “walk and turn” sobriety test by a police officer on the side of the road and wrote, “Gets an Uber and still got pulled over.” This turn of events prompted both concern and jokes from commenters who found the situation “ironic.”

Devin Nestle, whose TikTok username is @devinnestle, posted the video on Thursday and wrote, “I’m still mind blown this happened.” The video, which has accumulated over 2.2 million views and over 178,000 likes, shows Nestle standing on the side of the road with blue and red lights flashing in the background.

Nestle says, “I’m literally here with my f*cking Uber, this is my Uber” and turns the camera around to show the driver speaking with a police officer. The driver, who has one foot in front of the other, is listening to instructions from the officer and seems to be taking a field sobriety test.

Among the 2,400 comments, individuals wrote “designated drunk driver” and “Uber needs a lyft.” Nestle, who did not immediately respond to the Daily Dot’s request for comment via Facebook message, responded with laughing emoji to a comment that said “Reverse uno.”

Some commenters expressed concern for the driver and questioned if he was being “harassed.” Another person wrote, “I’m so confused on why they stopped this Uber.”

Uber, which made a commitment to safety on its website, wrote that its “vast network of riders and drivers holds one another accountable to help keep everyone safe.” Uber did not immediately respond to the Daily Dot’s request for comment via email.