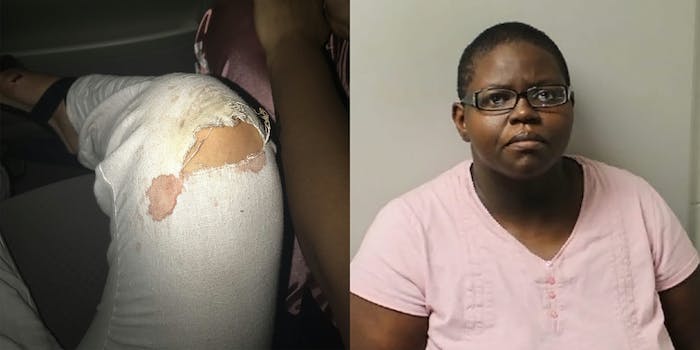 Her screams for help can be heard in the background of the 911 call.

A woman from Tallahassee, Florida, says she evaded being kidnapped by her Uber driver by jumping out of the car’s window while the car was in motion. The Uber driver has since been arrested.

On Wednesday morning, Brooke Adkins posted two photos to Twitter of her foot bleeding and a bloody rip in the knee of her jeans, writing that she had jumped out of a moving vehicle’s window earlier that night after realizing she was being kidnapped by her Uber driver.

According to WTXL, Adkins’ driver, 30-year-old Destiny Green, was arrested on suspicion of kidnapping and false imprisonment.

“…I got out okay but jumping out a moving car window and running for help has to be the scariest thing I’ve ever gone thru. I want girls to realize this happens & to be safe, always,” Adkins wrote.

PSA tonight I realized that being kidnapped from an uber driver is 100% real I’m so thankful that I got out okay but jumping out a moving car window and running for help has to be the scariest thing I’ve ever gone thru. I want girls to realize this happens & to be safe, always. pic.twitter.com/bQBWDKVRrM

Resulted with this, it could’ve been so much worse I was just in survival mode pic.twitter.com/JWsgOjM45G

In tweets following the photos of her injuries, and in the police reports she filed, Adkins described how she had eventually realized that her Uber driver was kidnapping her. A male friend had requested an Uber to take Adkins home, she said, and once she and Green got to her drop-off point, Green asked Adkins if they could drive around the block and listen to music.

Adkins wrote she thought the request was weird, but perhaps Green just wanted a friend, so she agreed, just to be nice. However, Adkins requested that the ride meter be left on, so that there would be a record of the ride. At one point, Green’s car was stopped by Florida State University Police, and at another Green asked Adkins to hold down the center console for her. Adkins soon realized they were 25 minutes away from her original destination.

Adkins told police that after being stopped by university police, she asked Green to let her out. Green refused, declining each of Adkins’ requests to be let out. Green also told Adkins that she was taking her to a hospital.

After Facetiming a friend and calling 911, where she could be heard screaming “help me,” Adkins then decided to jump out of the car’s windows. Green’s doors could not be opened, Adkins said, so she rolled the window down and held it down with her hands to prevent Green from rolling the window up, then jumped from the window as the vehicle was in motion. She then ran to a Walgreens, where she stayed until police arrived.

Court documents said that when officers went to Green’s home to interview her, Green told them she quit being an Uber driver because of Adkins, or “the girl,” as Green had called her. Green said Adkins had wanted to go to the hospital, but didn’t say why. She said she also didn’t remember Adkins asking to be let out of the car.

On Twitter, Adkins thanked other users for sharing her story, warning others about paying attention to their surroundings and who they’re surrounded by.

Thank you guys so much for spreading the word!! Kidnapping has been happening more recently than ever and I want to raise awareness that everyone just needs to be safe and aware of your surroundings and also who you are with