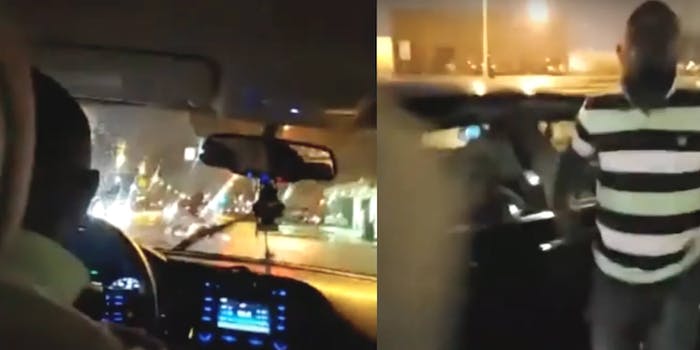 The stream shows the passengers begging to be let out of the car as he chases another driver.

A Virginia Uber driver has been charged with kidnapping after a Facebook live stream showed his passengers begging to be let out of the car as he went “fast and furious” after another driver.

According to CNN, on Monday night, Olufemi S. Olomola, 38,  picked up John Murray and his wife, Tameka Swann, during a routine Uber app request.

The couple was on a rare date night when their ride took a scary and dangerous turn.

Another driver rear-ended the vehicle and fled the scene.

Instead of calling the police to report the incident, Olomola made the questionable decision to chase after the other driver.

“I thought we were just going to pull over and they would exchange information, but the other driver pulled around us and took off,” Murray stated, per CNN. “I had no idea he was about to go fast and furious on us.”

The Facebook Live, recorded by Murray from the backseat, shows the driver wildly racing through the streets while the passengers are heard pleading with him to stop.

“I have four kids. I can’t be riding like this. Let us out,” Swann pleads as her husband’s concerned screams can be heard in the background.

In an interesting turn of events, the Uber driver then calls 911 on his phone and hands it to the distraught couple. Swann explains the situation to the 911 operator with the speakerphone on.

“We running through red lights, like two people almost hit us,” Swann reports.

Understanding the gravity of the situation, the operator then also pleads with Olomola to stop the vehicle.

Adding another twist to the roller coaster of a ride, the driver then runs another red light and hits another car before ironically speeding off.

Eventually, the driver stops and lets the couple out.

Richmond Police have charged Olomola with abduction, reckless driving, and a felony hit and run.

In a statement to CNN, Uber said that Olomola’s “behavior is deeply concerning and his access to the app has been removed.”

“We have been in contact with the rider and stand ready to support law enforcement on their investigation,” it added.

Murray and his wife were checked out by an ambulance and are reportedly still sore from the two accidents.

It is unclear whether the couple intends to sue Uber.