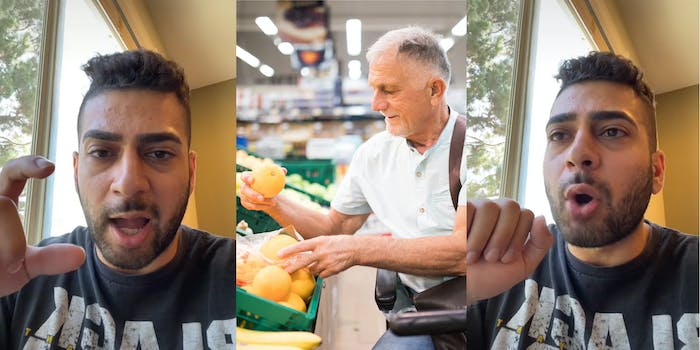 ‘This is gonna be a long f*cking Uber ride’: Uber driver says he helped a passenger grocery shop, paid for his groceries after picking him up from the hospital

After picking up a passenger from a hospital, an Uber driver claims he asked him for help grocery shopping. The driver, TikToker Keeon Sarlak (@keezycomedy), shares the bizarre comedy of errors that ensued in a viral video, during which he had to pay for the elderly man’s groceries.

“So, tell me if I got fucked,” he starts off the video, which received over 1.3 million views as of Saturday.

Sarlak says the man claimed to have spent three months in the hospital, so he was expecting the man to need some extra assistance due to his condition. He wasn’t, however, expecting him to ask for help grocery shopping.

“This guy can barely walk,” he notes. “So I’m thinking all right you’re gonna have to help him get in the car, get out of the car, get him to his door. Stuff like that, you know. Simple shit. Guy gets into my car, and he’s like, ‘I’m gonna need your help grocery shopping.'”

Although confused, Sarlak says he agreed to it. “My dad has health issues so I felt for this guy. He can barely walk. He’s wheezing and shit, so I’m like alright, let’s get this over with.”

In the grocery store, Sarlak claims the man picked out rather unhealthy items, including cigarettes, sausage, and a margarita mixer.

“He’s riding around in his electric cart, he’s like bumping into shit,” he continues. “And I’m thinking, alright dude, this is gonna be a long fucking Uber ride.”

When they were checking out, however, the TikToker claims the man’s card wasn’t working, so he had to pay for it.

“He gave me $50 in cash,” Sarlak says. “He owes me thirty bucks and says, ‘I’ll give you the rest of the money when we get to the ATM. There’s an ATM right across from here.'”

But the man’s card “got swallowed” by the ATM, and the bank was closed.

“This was supposed to be one Uber ride, but it’s just a fuck job,” he says. “I was like, ‘You can just pay me through the app. You can tip me extra through the app, no problem.'”

Despite picking him up from the hospital, Sarlak claims the man starting smoking a cigarette before taking him to his home.

“He’s like dying,” he says. “He’s literally wheezing. He’s like, ‘I haven’t had a cigarette in three months [coughs].’ Dude, if I hit him in the mouth he would be dead.”

After what had ensued, the driver wasn’t expecting to drive up to an expensive gated community.

“He lives in a gated community, a really nice community,” he notes. “We get past the guy at the gate, and in order to get to his crib, we have to go through another gate. I type in this code and then I’m driving up this hill. This is the richest shit I’ve ever seen in my life, this guy owns an estate. He looks at me from—he’s in the backseat, and he goes, ‘Welcome to the Lion Estate.’ I was like what?”

The creator says he helped the man unload his groceries, and the man reassured him that he would pay him through the app.

“Weirdest experience of my life,” he says. “Did I get fucked? Or is he gonna pay me?”

In a follow-up video, Sarak confirmed that the wheezing man has yet to pay him. The Uber driver chalks it up to a $34 loss but it should technically be more because the passenger had promised to pay him to help him grocery shop, he says.

Viewers were intrigued by his story, and several made quips that Sarlak is now a beneficiary of the man for his kind effort.

“You’re in his will now,” one viewer wrote.

“Even if he doesn’t pay you, good karma definitely will,” another said.

“You bought that man his last meal,” a third joked.

Others argued that the good deed, and the experience itself, was worth it, regardless of pay.

“You did a nice deed. Leave it at that. If you get the money you are owed, consider it a plus,” one user suggested.

“Bro, chill. These are those type of life adventures that you’ll reflect on for years. I love old people adventures. They are awesome,” another wrote.

“Lmao I’m offended he didn’t invite you inside for cigs, sausage and margaritas,” one user said.

“That’s how rich people stay rich he definitely needs a caregiver tho lol,” another argued.

The Daily Dot has reached out to Sarlak via TikTok comment and email.