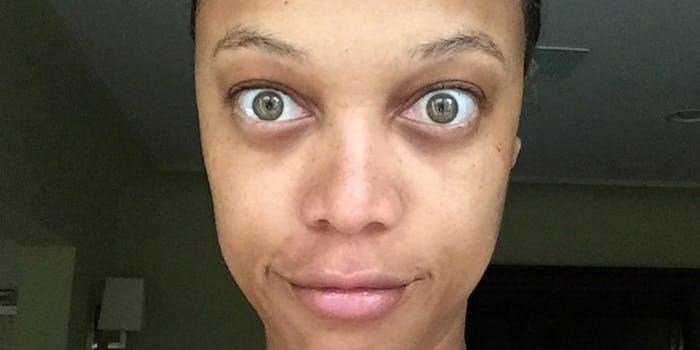 Anyone who has seen a single episode of America’s Next Top Model knows that Tyra Banks is the one and only expert of beauty and fashion. She knows all. She’s a Harvard Business School grad. No one can do it better. So when Tyra tells you that you “deserve” to see the real her, you better open up your eyes—and smize.

You know how people say #nofilter but you know there's a freakin' filter on their pic? Or maybe there's a smidge of retouching going on but they're lying and saying it's all raw & real? Well, this morn, I decided to give you a taste of the really real me. I wanted to smooth out my dark circles so badly!!! But I was like, "Naw, Ty. Show 'em the REAL you." So…here I am. Raw. And there YOU are…looking at me, studying this picture. Maybe you're thinking, "Whoa, she looks ROUGH." And if you are, great! You deserve to see the REAL me. The REALLY real me. #RawAndReal

As she explains in the caption, “I wanted to smooth out my dark circles so badly!!! But I was like, ‘Naw, Ty. Show ’em the REAL you.’”

In 2009, Banks famously showed her real hair on her talk show, Tyra.

And body positivity has always been a tenet of Tyra’s message. In 2009, she answered tabloid critics by telling them to kiss her “fat ass.” Legendary.

But Banks is not the only celebrity, or woman for that matter, taking selfies with no makeup to make a point. Earlier this year, the #nomakeupselfie campaign managed to raise $8 million for cancer research. And of course, stars have always posed without any powder for great attention and praise. In March, Gwyneth Paltrow posted a casual morning selfie without anything on her face:

Believe in the power of Tyra.