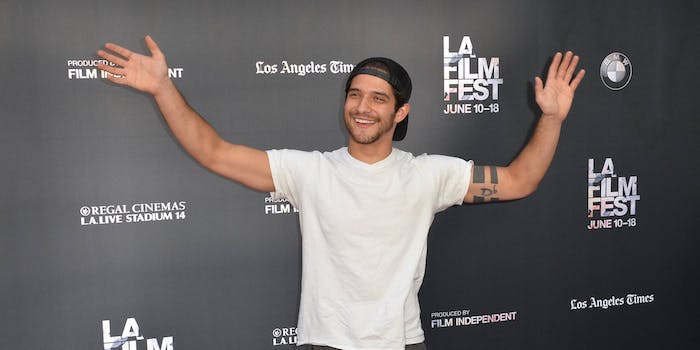 Tyler Posey comes out on Snapchat, takes to Twitter to clarify he’s not gay

'I just want to spread love in this world.'

The actor posted a subsequent Snapchat video calling his credibility into question as he appears to identify with a lamp. A rep for Posey told Fusion that the actor didn’t mean to call attention to his sexuality but rather his mood and that his statement was “meant in the context of ‘I’m happy,’ not as a coming out.”

Posey took to Twitter to clear things up on Saturday, confirming that he is not gay. The faux coming out appears to be a misguided attempt to show solidarity with those in the LGBT community.

I am a big proponent of love over hate, and standing together during divisive times.

[Part 2]: Although I'm not gay, I fully support the LGBTQ community. This was a moment intended to reflect that.

And everyone, I am truly sorry to the people I've offended or lessened how big coming out is. I just want to spread love in this world.

What Posey accomplishes, however, is trivializing a struggle felt by countless closeted LGBT people who may worry about massive consequences if they reveal their sexuality to family or close friends. Understandably, those in the community as well as allies have come out against Posey’s statements.

i'm glad u apologised & addressed but why do u think making 'jokes' about being gay is spreading love? pic.twitter.com/jhycooMFkE

It’s doubtful that Posey’s hoax coming out will negatively affect his standing with Teen Wolf. The show’s sixth and final season is slated to premiere on Nov. 15.