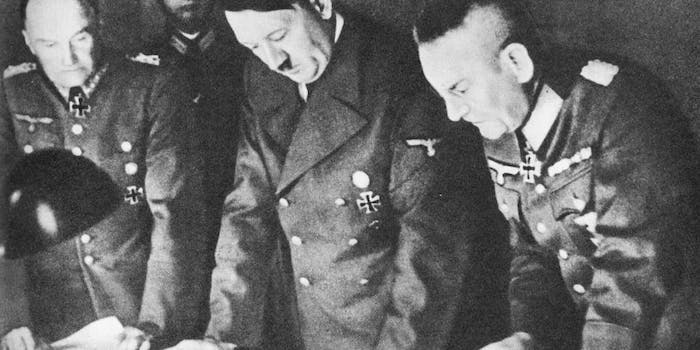 Follow World War II as if it were happening right now.

World War II is often romanticized as the last good war. And yet for most people who aren’t serious students of history, its highlights come as a jumble: Germany invaded everything, Japan bombed Pearl Harbor, then America showed up and saved the world. Right?

It’s hard to think of the war unfolding slowly, over the course of years, with no clear outcome in sight.

That’s where Twitter’s @RealTimeWWII comes in. Similar to Twitter feeds that serve as catch-all sources news of specific movements, @RealTimeWWII updates its followers multiple time each day on WWII events both large and small. But here’s the feed’s true innovation: it tweets in real time—except it’s 72 years later.

“The idea just popped into my head,” Alwyn Collinson, an Oxford University history graduate and the sole writer behind @RealTimeWWII, told the Daily Dot. “I was inspired by breaking news feeds and people livetweeting events. I wanted that same sense of immediacy, the feeling that things were changing now, and there’s tremendous potential- the excitement you get when you read the first reports of something earthshaking like Tahrir Square on Twitter.”

“Edward: ‘One of the capital ships seemed to fly up in the air! There are 2 or 3 other explosions further off- one of the ships is hit.’” reads one recent tweet, quoting an eyewitness “soon” after a submarine attack.

“French and German artillery are exchanging fire on the Rhine frontier. Eyewitnesses call no-man’s land between the armies ‘a sea of mud,’” reads another. Quotes and reports are often accompanied by contemporary photos and videos.

Maintaining such a prolific feed is no small feat. Collinson spends his days working for the Daily Info, an Oxford magazine. He uses SocialOomph to schedule tweets to be sent while he’s at work, he says, but he tweets in real-time when he can, he says.

Active only since September 4th, @RealTimeWWII has already amassed over 40,000 followers. With so many fans, Collinson feels the pressure of maintaining his prolific feed. It’s still 1939 in its universe.

“I’ll certainly try for 6 years,” he says. “I fear I may be stuck with this. I might have to recruit some help at some point–we’re less than 2 months in and I’m already eagerly anticipating Hitler’s death.”