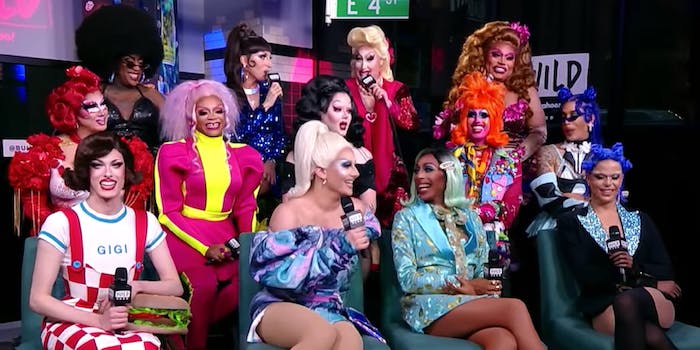 Twitter verifies drag queens of color after getting called out

Twitter has verified five drag queens of color after receiving some backlash for leaving them without checkmarks—and handing one out to an alleged sexual predator.

Writer and culture critic Evan Ross Katz posted to Twitter on April 15, pointing out that some queens from the cast of RuPaul’s Drag Race season 12 weren’t given the blue badges, while others had been. One queen who’d been given the social media star treatment includes the disqualified contestant Sherry Pie, who lost her chance to win the competition after being accused of sexual misconduct. Pie, real name Joey Gugliemelli, posed as a female casting director and asked male actors—some of which were his classmates at a New York state school—to do degrading and sexual acts on camera.

Understandably, Twitter’s inconsistent verification had some of its users confused and frustrated. Drag Race season 9 runner-up Peppermint quickly pointed out: “Is it a COINCIDENCE they are all people of color?”

Enter the winner of Drag Race season 10, Aquaria. She asked Twitter if it could verify the queens mentioned in Katz’s tweet.

“Hi [VH1 and Twitter,] could we please try to work on verifying the below queens? An overwhelming amount of the queens of color on this current season (and many past) deserve the same recognition for their art, achievements, and influence on [RuPaul’s Drag Race] and pop culture in general,” she tweeted.

Aquaria ultimately seemed satisfied with this result, but noted that she shouldn’t have to get involved for queens of color to get the respect they deserve. The implicit lesson here is that a white queen should not have to intervene to get queens of color equal treatment and respect.

“These queens deserved it long before, however I appreciate someone’s listening. Let’s respect these queens concerns before others have to get involved next time. It’s all about learning to be better,” Aquaria tweeted.

Aquaria declined to give comment for this story. Heidi N Closet did not immediately respond to the Daily Dot’s request for comment.