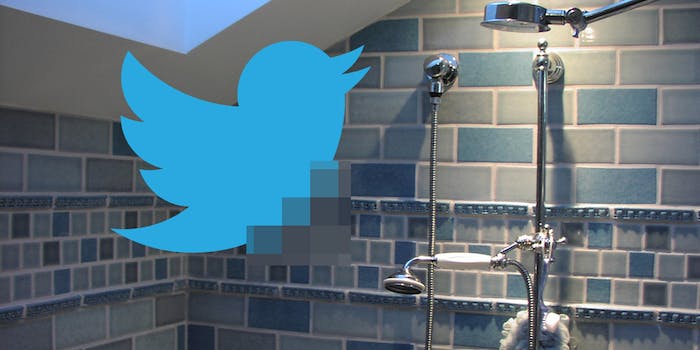 Men: Do not send unsolicited d**k pics to women on Twitter

Or else they might send it to everyone they know. And it's completely in their right.

Hey guys, listen up. It’s OK to be proud of your penis. But do not, under any circumstances, send photos of your flabby naked body to women who never asked for them.

I am warning all of you that this is a flabby fat man asking me to rate his penis https://t.co/T1ARXt7sYy

On Saturday, his dong delivery service backfired when one of those women, Rachel Millman, linked to the photo to warn her followers about what Big Jim was up to.

Jim’s response was to call her a bitch and demand she take it down. What you’re about to see is the slow panic of a man who’s new to social media and is just now realizing that what you post can be used against you.

“I’ve tweeted unsolicited dick pics in the past,” Millman told me in a DM, “and they’re always the worst dicks and the worst photos too—it’s always some pale dong that looks like a thumb with ratty ass pubes. I don’t know why I’m a magnet for them but I get them SO MUCH.

“So once in a while I’ll be like, ‘Hey, pals, check out this awful penis I got today.’ So it’s semi-expected from me, but I try to give a warning at this point in order to not have someone open it at work, or in front of their 2-year-old. So my immediate followers/friends who kind of know what to expect with this stuff were pretty amused. This dude is asking me to take it down, but NO! This is what he gets for unsolicited harassment. And he should probably learn to delete tweets, or not bother girls online OR not have his face in his nudes. Any combination of those, but especially the second one.

“Some call me mean or bitchy for calling this behavior out, but in my opinion, silently ignoring it is coded to these guys as approval. ‘Well, she didn’t say no, she just didn’t say anything’—so I call it out, because frankly, FUCK THAT.

Update: There are numerous theories circulating Twitter regarding the true identity of Big Jim White. Considering his history of tweeting his flaccid wiener to random women and then haranguing them for linking to or retweeting it, he might be:

1) A man with a humiliation fetish, who gets off on women publicly shaming him. If the dongs are being tweeted in earnest, this is likely part of the equation. He must revel somewhat in the attention. Otherwise, why would he not have deleted the shared images he’s so upset over?

2) A normal person with little understanding of social media, which, if you take his story at face value, is the simplest possible explanation. Deleting a Twitter photo is not self-explanatory. It’s a hidden feature in a drop-down menu that Twitter newbies might overlook. But maybe Big Jim does know all this, and he’s…

3) A devoted troll playing a long con, sending someone else’s dick pics to random women and giggling when they’re mocked and spread around Twitter. Which means not only is he harassing women, he’s mocking some random naked guy.

“Women still get harassed daily by real people,” Millman writes, “so the fact that someone out there thinks it’s great to send this under the guise of ‘irony’—it’s still harassment.”

Which brings me back to the original point:

I’m not going to tell you how to live your life, but maybe don’t send your weird ass Joe camel looking dick & balls to girls online

Photo via andrechinn (CC BY 2.0) | remix by Jason Reed