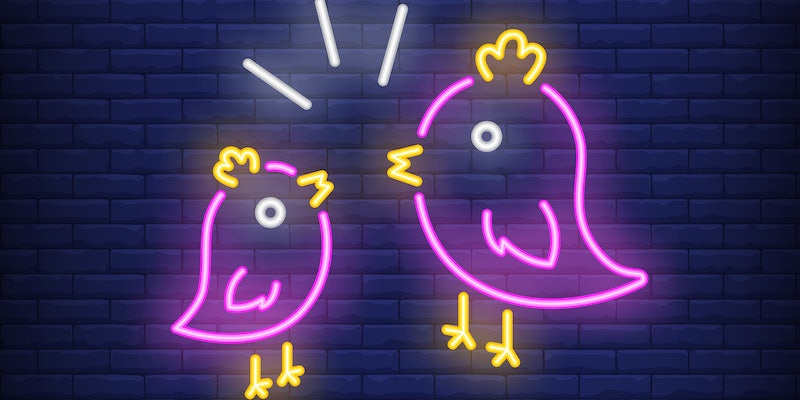 Others also say they have been flagged for kink tweets on private accounts.

“You may not promote violence against, threaten, or harass other people on the basis of race, ethnicity, national origin, sexual orientation, gender, gender identity, religious affiliation, age, disability, or serious disease,” the Twitter notification read. @KittenFemme’s NSFW account was subsequently locked for 12 hours, preventing her from tweeting, retweeting, or liking content. In order to start the 12-hour suspension, Twitter forced her to remove the tweet.

“apparently if you say b*mbo but like, just that word? its fine. add in degrading stuff? instant suspension,” @KittenFemme tweeted. “it appears to be if you @ someone and then say b*mbo plus other degrading stuff, as far as i can tell.”

apparently if you say b*mbo but like, just that word? its fine. add in degrading stuff? instant suspension

@KittenFemme explained to the Daily Dot that her friend @NightmareNympho (who uses she/her, it/its, and he/him pronouns) was suspended yesterday for 12 hours for flirtatiously calling her a “dumb bimbo slut.” After one of her friends, a sex worker, claimed she saw another user’s account locked for saying “bimbo,” @KittenFemme’s friend suggested the word may have been added to an automatic Twitter suspension list.

“It was at this point that I ran experiments. I tried promoting my girlfriend @Calliethulhu’s work, which uses the phrase ‘bimbo,’ to see if it was that word alone,” @KittenFemme told the Daily Dot over Twitter DM. The post itself didn’t trigger a suspension. “We both speculated that it was more than likely an algorithmic thing which sees bimbo and adds ‘points,’ and the more degrading words in a tweet, the more ‘points’ you get until it auto suspended you.”

@KittenFemme continued to test the process, first writing a “bimbo” tweet without mentioning anyone (or writing a message with an “@” to another user), and then @ing herself. She was suspended for the latter tweet for 12 hours.

“My experiments led to the following conclusion: if you @ someone, anyone, even yourself, and include ‘bimbo + derogatory/degrading language’ you will receive a 12-hour suspension,” she said. “I think it weighs slut really heavily too. I haven’t tried, but I honestly think ‘bimbo slut’ is enough to get a suspension.”

It remains unclear why Twitter specifically targeted @KittenFemme’s private 18+ account. When I used my own private NSFW profile to post multiple tweets with similar language, Twitter did not suspend my account or request that I remove the tweets. However, one anonymous Twitter user told the Daily Dot that their private NSFW account was suspended after sending a hypnosis-themed kink tweet to their dominant-submissive play partner, who was a mutual follower also using a private account. In that tweet, the suspended user called their play partner a “slut.” Their account was suspended for 18 hours afterward.

The Daily Dot also reached out to two other Twitter users who publicly reported suspensions on their NSFW accounts for non-harassing content and is awaiting responses from both.

As for Twitter’s handle on sexual content in NSFW settings, it seems unlikely that Twitter is outright banning tweets for 18+ material. Twitter’s rules specifically state that it “allows some forms of graphic violence and/or adult content in Tweets marked as containing sensitive media,” with the latter defined as “any media that is pornographic and/or may be intended to cause sexual arousal.” So while sexually explicit media may be hidden from view by default, it’s generally allowed on the site. (The Daily Dot has reached out to Twitter for further comment.)

Rather, it seems Twitter’s content moderation AI has trouble distinguishing between abusive tweets and those written between consenting sex partners. Whether Twitter plans to fix these issues is unclear. But combined with Tumblr and Facebook’s crackdowns on sexual content, it’s just another sign that adult content creators are being further marginalized on social media networks.

While @KittenFemme understands Twitter is trying to shut down harassing tweets, she believes Twitter’s administrators simply “don’t care” about how bans of words like “bimbo” impact the kink community (though, it might simply be that admins are unaware that these words are used as a form of play in kink). For her, bimbo kink—a self-explanatory, empowering form of kink—is a “relaxing reprieve from the rest of the world.”

“I have other, more degradation-based kinks which are actually really important to me as an abuse survivor as a means of dealing with my abuse, and now I’m worried about those, too,” she told the Daily Dot. “Like am I gonna get suspended for something else too?”