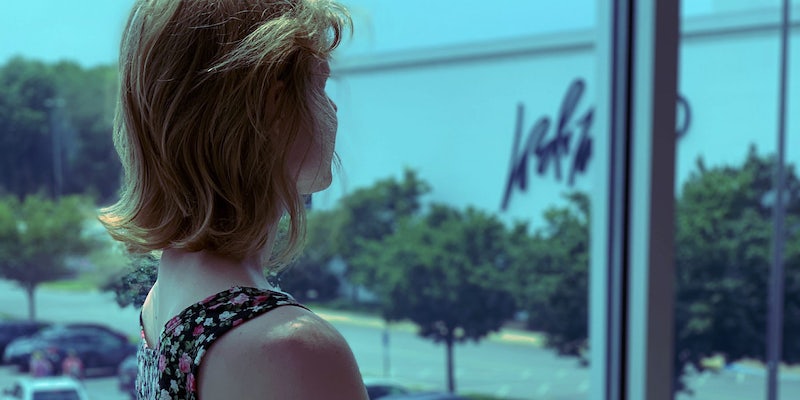 Twitter suspended me for making a ‘slut’ joke. But what if I am a slut?

Twitter seems to have a problem with reclaimed slurs.

All this began after Mashable staff writer Jess Joho, who I worked with while freelancing at Kill Screen, penned a tweet joking about “hanging up my slut boots and turning in my slut badge and gun.” I thought it was hilarious, so I decided to hop in and write a tweet of my own: “once a slut, always a slut.” The tweet wasn’t meant to shame Jess. In fact, it was supposed to be a tongue-in-cheek jab at myself, which I knew Jess would like. Apparently, Twitter didn’t think my joke was funny. I was thrown in Twitter Jail at 8:51pm CT and kept there for the night.

“Hey @Twitter, you locked my very good friend @acvalens’ account for celebrating my sluttiness plz fix your mess!!!!!” Jess tweeted. “Ban the Nazis, NOT the woman-on-woman love on your website.”

hey @Twitter, you locked my very good friend @acvalens' account for celebrating my sluttiness plz fix your mess!!!!! ban the nazis, NOT the woman on woman love on your website pic.twitter.com/rsqi9jLMUS

When I reached out to Jess to ask her how if she was surprised that I was locked, she said at first that she was taken by surprise.

“I was shocked because I throw around the word slut on the daily—it’s proudly and loudly my brand. And this has never happened to me. I’ve never heard of it happening to anyone,” Jess said. “Actually, I’ve been called a slut maliciously by Twitter trolls rather than friends, and to my knowledge, no one locked or blocked their accounts.”

That said, Jess brought up how Twitter has a tendency to target Twitter users who use the word “TERF” and suspend their accounts. So while she was surprised, she also said that it makes sense.

“In retrospect I really shouldn’t have been so shocked to learn that trolls on Twitter would find a new way to target a trans woman, especially one who works in games,” she told me.

Even though my account is back up and running, the suspension shouldn’t have happened in the first place. I can’t stress enough how stupidly obvious it is that Jess and I are friends. There’s a long history of friendly tweets between the two of us, including the fact she interviewed me for a story on virtual reality porn and gave me a personal shoutout when the piece went live. She even disclosed our social connection in her story. It would have taken a real person 10 minutes to figure out that, yes, I am not harassing her. But instead, Twitter deemed me problematic and whisked me away without any opportunity to warn my followers why I went dark. Twitter thinks these tools are making its platform a better place, but they’re just causing more headaches and problems for marginalized folks who rely on the service to, like, pay rent.

Mistakes happen, and I could forgive Twitter if this was just a one-time lapse in judgment. But I don’t believe this is an isolated incident. In March, Twitter user @KittenFemme (who uses she/her and it/its pronouns) had her private account temporarily locked for 18 hours after tweeting the term “dumb hot bimbo slut” about herself. When I talked to @KittenFemme, she concluded that if you mention anyone on the site with “bimbo” and “derogatory/degrading language,” it will lead to a suspension because the site “weighs slut really heavily.” Another anonymous source claimed their NSFW account faced an 18-hour suspension after calling a consenting partner “slut.” Now that my account was locked down for making a joke about being a slut, it seems incredibly likely that Twitter’s algorithm isn’t just making mistakes but is fundamentally broken.

It seems obvious that Hambly was trying to rally his followers to attack me by portraying me as inappropriately promiscuous, as if I was inviting their gaze. It’s subtle, but, in a roundabout way, he’s calling me a slut. And his followers know that. They replied by half-seriously asking where they could find sexually explicit pictures of me.

For the record, Twitter’s official policy on abusive sexual comments is that “you may not direct abuse at someone by sending unwanted sexual content, objectifying them in a sexually explicit manner, or otherwise engaging in sexual misconduct.” It allows “adult content,” defined as “media that is pornographic and/or may be intended to cause sexual arousal,” if it’s marked as sensitive. In its policy, Twitter does not specifically ban certain words or phrases.

And yet, Twitter’s algorithms pick up on words and language but not the ulterior motives behind its posters’ behavior. To date, Hambly’s tweet is still up.

Nice try, Ana. I WON'T be looking at your nudes this time!! pic.twitter.com/04VnDhpazt

I can't get over how serious his warning is
I regret to inform you that a WOMAN I HAVE MADE FUN OF is posting HER BARE, BEAUTIFUL BREASTS ON THE INTERNET. Please, for the love of god, avoid engaging with her ENTRAPMENT RUSE, SHE IS A HEATHEN SLUT !!!

In order to expose shame, sometimes we have to be able to reclaim certain slurs or joke about complicated topics. I call myself a slut, for instance, out of pride. Sex is awesome, and I love it. That doesn’t mean I’m completely sexually liberated. But openly stating my sexual preferences is an important and necessary thing for me as a trans woman. Punishing all users indiscriminately for using the word “slut” shuts out the women who need to use the term to joke about themselves and rewrite the word’s usage. Banning it forever just turns it into a permanent mark that sluts can never, ever own.

So yes, I’m upset Twitter banned me for 12 hours. But my suspension isn’t just about me. It’s a threat to anyone writing and reporting on identities. We need the room to use messy language and unpack its politics. When Twitter kills our sense of humor, it censors our ability to cope and survive in the world, too.

Update 5:04pm CT, June 6: This article has been updated with additional comments from Jess Joho.

Update 12:25pm CT, June 7: Within 24 hours of this article’s publication, trans Twitter user @leftistthot420 was suspended from Twitter for tweeting “thank you for representing the bimbo slut community” at me in relation to this article. The comment, which was obviously a joke between two friends, is ironic given Twitter’s apology for my initial suspension. 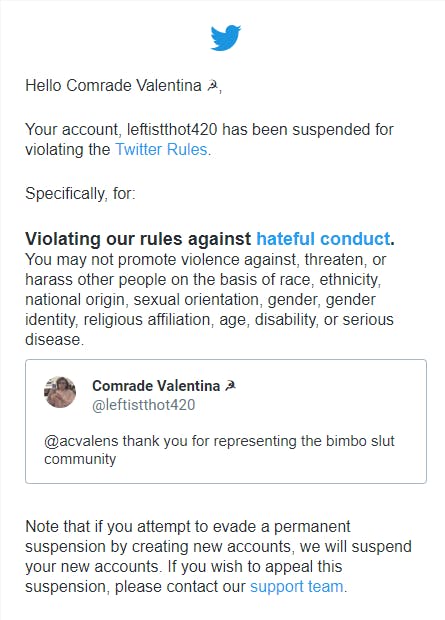