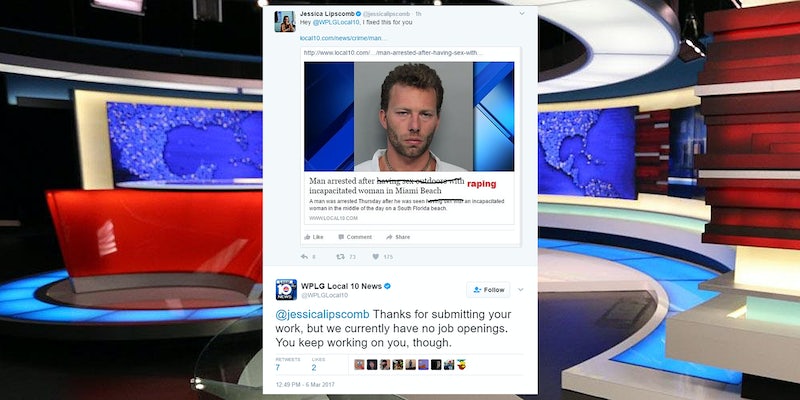 This is a master class in how not to handle a situation online.

But the social media director at WPLG Local 10 News is in trouble after doing just that.

It started when they posted a news story about a man arrested for allegedly having sex with an incapacitated woman.

INCAPACITATED SEX ARREST – A man having sex with an incapacitated woman in the middle of the day on a South Florida beach has been arrested.

Although factually accurate, stories like this have been a point of contention for women, because they assert that framing these stories with softer, more passive language–instead of saying “rape” or “sexual assault”—is a way of minimizing the crimes committed.

What the social media person running @WPLGLocal10 probably should have done was nothing. Or said, “Thank you, we are looking into it.”

That’s not what they did, though. Instead, they mocked Lipscomb for that.

Yea that is about as big a “NOPE” as you can perform online.

Probably best to keep your head down after that.

The article online has been updated after this, and according to the site’s Twitter account, their social media person has been disciplined.

We apologize to @jessicalipscomb and we have changed the headline. The social media director has been disciplined.

The bad tweets, as they should be, have been deleted.