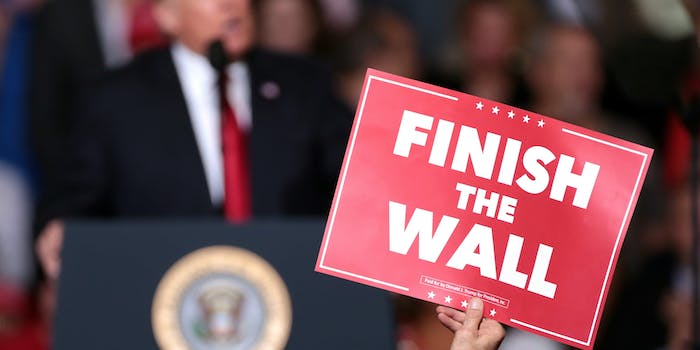 Twitter has so, so many questions about the GoFundMe to build Trump’s wall

First off, it's going to cost a lot more than $5 million.

Twitter has a lot of questions for the veteran responsible for the GoFundMe that has already raised over $5 million to get President Donald Trump his border wall.

Brian Kolfage came up with the idea and put together the “Wall Fundraising Team” along with the #GoFundTheWall hashtag earlier this week. Under the GoFundMe campaign called “We The People Will Fund The Wall,” Kolfage called on 63 million Trump voters to pledge $80 each to build the wall. That would result in $5 billion, or “half the wall,” as he claims. The GoFundMe is currently set at the site’s maximum limit, $1 billion.

“Democrats are going to stall this project by every means possible and play political games to ensure President Trump doesn’t get his victor,” Kolfage writes on the fundraiser. “They’d rather see President Trump fail, than see America succeed. However, if we can fund a large portion of this wall, it will jumpstart things and will be less money Trump has to secure from our politicians.”

Kolfage stresses the GoFundMe isn’t a scam and mentions that he has “a public figure Facebook page with a blue check mark” that verifies his identity. He also says the fundraiser’s team has “contacted the Trump Administration to secure a point of contact where all the funds will go upon completion.”

That said, Twitter has questions for Kolfage. For one, it seems a lot like Trump’s base is giving in and funding the wall themselves because they know Trump’s claims of getting Mexico to do it don’t add up.

Trump supporters sending money to a GoFundMe campaign for a border wall is the ultimate confirmation that even his base knows he’s a shameless liar. Mexico isn’t, wasn’t and ain’t ever gonna pay for Trump’s wall.pic.twitter.com/nY9FWd74D9

MAGA Cultists: US FIRST AND THEN MEXICO!!!!

MAGA Cultists: We are! We made a GoFundMe Page!

Then there’s the sheer amount of money required to build the wall. Trump has suggested the wall could cost anywhere from $15 billion to $25 billion, which is enormous compared to Kolfage’s estimated $10 billion for a full wall. Sure, $5 million looks like a lot, but it’s pocket change compared to the full cost.

The GoFundMe page started by the MAGA folks for the border wall has raised over $3 million.

The cost of the wall is about $25 BILLION.

No one said these people were good at math.

Jesus Christ, maybe you should do a gofundme for universal healthcare or homeless vets? also, you'll never reach 5 billion. good luck with your fear mongering white supremacist scams though.

Realistically speaking, it’s incredibly unlikely that the wall will ever be built in the first place. Kolfage stresses the team will “hold all funds and not release a single penny until we have all legal aspects covered” to make sure “our money goes only to the wall.” But 2020 is approaching a little too fast at this rate.

What kind of person donates money to a GoFundMe page to build a border wall that never will be built? The kind of person who donates to a mega-church founder so he can buy a private jet to fly them to heaven.

MAGA dad- WELL ENJOY THEM TEARS! WE OWNED THEM!

In short, some Twitter users think the GoFundMe is nothing short of a scam.

Something tells me that the gofundme for the border wall is going to end up being a huge scam but pic.twitter.com/yABdQDJ29m

What do they think the guy who started the GoFundMe is gonna do, actually give ALL of that money to the (despised) federal government to help finance a wall that will never be built?

. @gofundme is partnering with me, a completely legitimate person, to raise $500 trillion for the SpaceForce® Space Wall®!!! "It's not a scam, it's GoFundMe".

Incredible that @gofundme is still leaving this “wall fund” scam up. Someone is going to potentially pocket a lot of money from a lot of stupid people. https://t.co/i478s9k25F

As for Kolfage, he seems unphased by the response.

“It’s America we can do anything we want!” he tweeted at one critic. The Daily Dot reached out to Kolfage to clarify how that’s going for him.