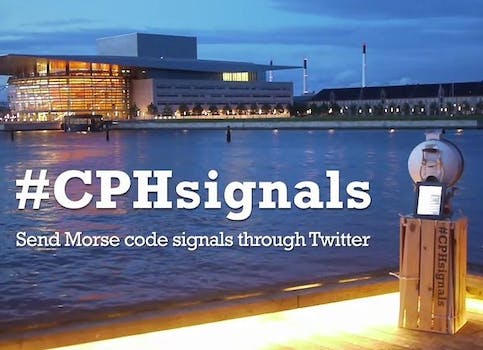 An old method of communication met a new one as tweets were transmitted across the harbor using blinking lights.

Bringing together an old form of communication with a new one, a project lit up the harbor in Copenhagen, Denmark using tweets turned into Morse code.

When a tweet was sent to @signals_CHavn or @signals_nyhavn along with the hashtag #CPHsignals, an Arduino device converted those messages into Morse code. The old maritime lamp connected to each account then blinked tweets across the harbor. The setup on the opposite side of the harbor decoded and displayed messages.

“The aim of this urban intervention was to connect the two sides of the harbour, that are geographically close but still feel disconnected,” wrote Kostantinos Frantzis, one of the students behind the project. “Furthermore, it showcases how communication between remote locations was achieved in the past, in the context of Copenhagen’s maritime culture.”

For those who weren’t able to get down to the docks themselves, the Twitter account for each light shared the flickering tweets as they were transmitted. A livestreaming webcam setup would have been nice here, however.

Sadly, the project has come to an close. Frantzis confirmed that it ended last month.

A video showcasing the project was posted on Vimeo. It shows several people testing out the lights in person, by posting tweets via iPads connected to each light. Handily, there’s a Morse code alphabet on the back of each iPad case, just to help people understand exactly what the other light is blinking.

It’s not the first Twitter-to-real-life project upon which Frantzis has embarked. Previously, he turned tweets mentioning specific fruits on Twitter into smoothies. Yum.