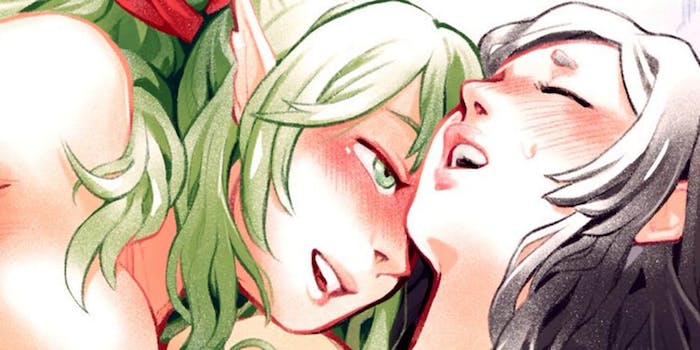 “If you have a suggestive banner, PLEASE CHANGE IT—this was the banner that earned me a permanent suspension,” Bramblefix tweeted on Jan. 5. “Maybe I’m stupid but I thought twitter’s NSFW policy meant no explicit nudity in your profile, but it’s really vague, and too much titty could get your account banned.”

holy shit I have so much art to show you guys. It took me 3 appeals and two full weeks to get unsuspended. Thank you SO MUCH to everyone who jumped on to my patreon!!

If you have a suggestive banner, PLEASE CHANGE IT – this was the banner that earned me a permanent suspension. Maybe I'm stupid but I thought twitter's NSFW policy meant no explicit nudity in your profile, but it's really vague, and too much titty could get your account banned. pic.twitter.com/28Ff6mPuCq

Bramble appealed the decision twice and was rejected both times for “violating Twitter’s Terms of Service” regarding “hateful or sensitive content in your profile,” according to emails Bramble shared with the Daily Dot. Then, after the third appeal, Twitter said Bramble’s account “does not appear to be in violation of the Twitter Rules” after all, and the permanent suspension was reversed.

“[A]t first I didn’t even realize it WAS a permanent suspension, the email was so, so vague about the suspension and what it was for it was only when my first appeal got rejected I even realized it WAS permanent,” Bramble told the Daily Dot. “It took a few days for me to actually start worrying.”

“Twitter really doesn’t protect anyone in my field, it truly sucks,” Bramble said. “Not just artists, but anyone creating any kind of queer erotica, writers and sex workers and all. This whole suspension business made me realize that social media is just hell for us right now. We get deplatformed in an instant, and we get harassed like crazy, and it really seems disproportionate against queer creators especially.”

Last month, Twitter updated its terms of service, leading many users to discover Twitter’s revised “sensitive media” policy from mid-2019. Many adult creators and sex workers did not realize the policy was already in place, and amid a new clause granting Twitter the right to shadowban in all but name, Twitter did little to curtail panic over a potential Twitter NSFW ban.

“[T]he misinformation was really running rampant there for a while, and still is even,” Bramble said. “It’s just that the [terms of service] is SO vague about what is or is not considered NSFW, it makes it very hard to know sometimes what is OK and what’s not. Even now, since the email Twitter sent about being unsuspended basically says, ‘hey, you didn’t break any rules after all!’ I’m still left totally confused about what’s against [the rules].”

Bramble isn’t the only queer adult Twitter user impacted by the site’s vague profile header rules. Kyle “Aphyr” Kingsbury, a computer safety researcher and member of the queer leather community, faced a 12-day Twitter suspension for having a picture of his bare rear in his Twitter profile header. Aphyr’s account was only reinstated after “extended public complaint and 4+ Twitter employees working on my behalf,” he told followers, explaining the experience was “consistent” with previous suspensions.

Hi folks. I was suspended for the last 12 days because I had this photo of my butt in my header, which violates the Twitter rules against non-artistic adult content. I stayed suspended so long because Twitter's email verification system was broken and refused to send email. pic.twitter.com/2rizrGvLqC

Normal @TwitterSupport channels being what they are, it took extended public complaint and 4+ Twitter employees working on my behalf to fix this. This is consistent with my other suspensions over the years, and folks like @jennschiffer have experienced it too.

Aphyr imagines SESTA-FOSTA, advertising partners’ policies, App Store rules, and payment processors’ policies may factor into Twitter’s adult content rules, but he says it’s equally as likely that policies are “a reflection of complicated internal politics” or “games of telephone.” Aphyr has since left Twitter and set up a Mastodon instance on the Fediverse called woof.group for the LGBTQ leather community, and he encourages marginalized users to run their own online spaces as an alternative to relying on a “global corporate [social media] platform” like Twitter.

“I wish we had better insight into why these policies are happening,” Aphyr told the Daily Dot. “Twitter’s email to me said it was so people felt safe, which felt hilarious. Who felt unsafe ’cause they saw [someone’s] butt on an exercise ball!”

In the meantime, Aphyr thinks Twitter will “become more rigorous in its policing over time” because organizations generally “accrete structure over time,” which can be seen in other social media platforms like Facebook. Bramble feels the same way, saying she “wouldn’t be surprised” if Twitter outright institutes its own NSFW ban in the near future.

“At first I was thinking of [the suspension] like a nice break, but that was shattered when my first appeal got rejected. I cried a ton,” Bramble said. “It was just so incredibly distressing to think of losing that audience, which I’d worked so hard to build up for the past year, since getting removed from Tumblr. It felt just incredibly unfair.”

Update 5:13pm CT, Jan. 8: Regarding Bramble and Aphyr’s suspensions, a Twitter spokesperson told the Daily Dot that, “We try our best to get it right the first time but sometimes we make mistakes and we work to fix these as quickly as possible.”