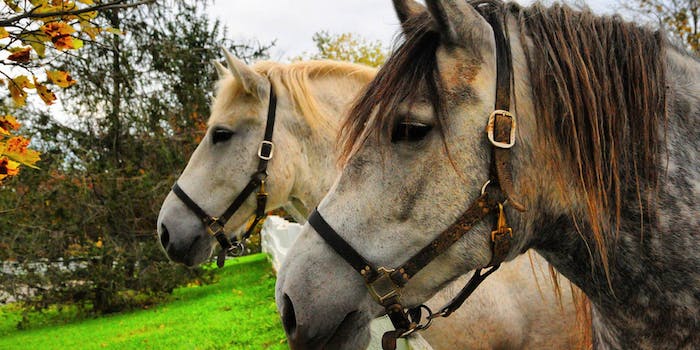 It is not against the law to insult someone by calling them “fucking crazy” on Twitter—something made clear by a strange defamation lawsuit that started with an unlucky horse.

In 2010, a toxicology research scientist named Mara Feld bought a seven-year-old thoroughbred gelding named Munition, reports Motherboard. The horse trainer, who raised the horse, gave Feld a pretty good deal (he sold Munition for $1) with the expectation that Feld would give it a good home. But giving a horse a home is expensive, and Feld soon realized she could not afford to keep Munition.

Feld eventually sold him, and the horse trainer and other people in the equine community believe Munition was sold to a “kill buyer” and taken to a Canadian slaughterhouse. The sad ending for the beloved horse made people in the horse training community irate, with much of the anger directed at Feld for inadvertently turning Munition into meat.

Crystal Conway read about Munition’s tale online, and thought Feld behaved reprehensibly. Conway, who works in the thoroughbred horse industry in Kentucky, went on Twitter to throw shade at Feld. “Mara Feld aka Gina Holt—you are fucking crazy!” she wrote. (Gila Holt was an alias Feld was using at the time.)

The judge dismissed the case, pointing out that the statement was clearly an opinion—not a medical diagnosis, as the suit claimed—and that it was necessary to look at other tweets to derive context. Or, as presiding U.S. District Judge Dennis Saylor explained it:

The phrase ‘Mara Feld . . . is fucking crazy,’ when viewed in that context, cannot reasonably be understood to state actual facts about plaintiff’s mental state. It was obviously intended as criticism—that is, as opinion—not as a statement of fact. The complaint therefore cannot base a claim of defamation on that statement.

While this lawsuit was frivolous, Saylor’s decision to highlight the necessity of context when judging tweets for defamation may be used as precedent in future Twitter defamation lawsuits.

Conway had a better outcome for her first Twitter defamation suit than babydoll banshee Courtney Love. In what is considered the first Twitter defamation case, Love paid $430,000 in a settlement to fashion designer Dawn Simorangkir for posting defamatory tweets. In 2014, however, Love won the second Twitter case against her. Accused of libel by her former lawyer for remarks she made on Twitter, Love was found not guilty in under three hours.

As Twitter use continues to grow more popular, judges and jury members will be more likely to display understanding of how the social networking site works, and display a more nuanced attitude towards cases like these.

You can read the whole fucking crazy lawsuit here.