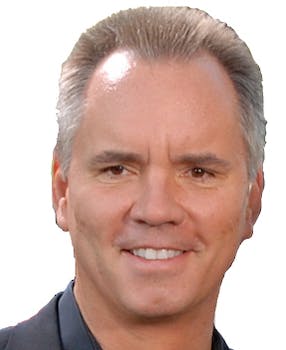 Will the real Sandusky please stand up?

Jerry Sandusky is the former Penn State football coach who was convicted on 45 counts of sexual abuse last week and is currently awaiting sentence in prison. Gerry Sandusky, on the other hand, is a play-by-play announcer for the Baltimore Ravens whose career in broadcasting has spanned over two decades. He also has over 5,700 Twitter followers.

The two Sanduskys are not related, but the similar name is enough for people to attack Gerry—with a “G”—on Twitter, NBC Sports reported.

“You can go to hell after what you did to those boys,” Buddha tweeted.

“You’ve got some pair showing your god damned face on twitter you sick son of a bitch,” Thomas Rudolph wrote.

Instead of “dropping it,” as one Twitterer suggested, Gerry Sandusky has taken to responding to the estimated hundreds of messages and tweets from “haters” with some variation of “I’m Gerry with a G. No relation to the former Penn St coach.”

Gerry Sandusky hasn’t lost his sense of humor through the whole thing, and even uses sarcasm when responding to the Gerry/Jerry confusion.

“The letter G is the 7th letter in the alphabet. The letter J is the 10th. Who knew that small gap would lead to such a big deal on Twitter?” he asked.

Through everything, he’s grateful that people are spreading the word he’s not the Jerry they’re talking about.

“Once again, thanks to all of you who help get the word out that Gerry and Jerry are not only different spellings, we’re different people,” he tweeted.