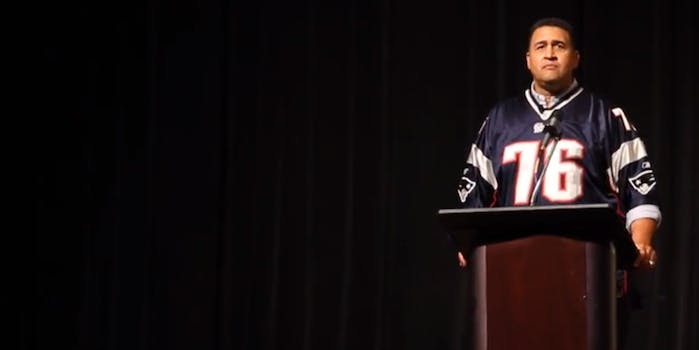 Former NFL player Brian Holloway wants to find the hundreds of teens who wrecked his holiday home. But he’s not looking for revenge: Instead, he hopes to “reform” them.

Police believe 200-400 teens attended a Labor Day weekend party at the Stephentown, N.Y. residence. Holloway—who played for the Oakland Raiders and New England Patriots before his 1988 retirement—was at his regular home in Florida at the time. He found out about the rampage from one of his sons, who tweeted photos of the destruction and the teens taking drugs and alcohol.

Holloway monitored the tweets as teens caused an estimated $20,000 of damage, including broken windows, holes in doors, and graffiti. The figure doesn’t include stolen items. The tweets described partygoers fleeing as police showed up, even before Holloway called the cops.

The L.A. Times notes school officials in the area have identified some of the teens involved, though there are no arrests so far.

Holloway, now a motivational speaker, took matters into his own hands. Through Twitter, he created a list of 200 teens he believes attended and hopes they will own up for their actions. He posted the list on a website that’s now offline but still appears in a Google cache.

“I know one thing, if my child was involved I would want to know everything NOW; we are old school disciplinarians, we do not sit back, we take action, we step in and take charge,” he wrote.

Holloway, whose last tweet was in March, asked for some help from the community in cleaning up and repairing the house. However, he placed more emphasis on helping the kids who were using drugs and alcohol than on the damage to his home.

That said, Holloway’s appeal was a mild success, as five teens helped clean up the home, according to UPI. However, they claimed some classmates were shunning them for offering a hand.