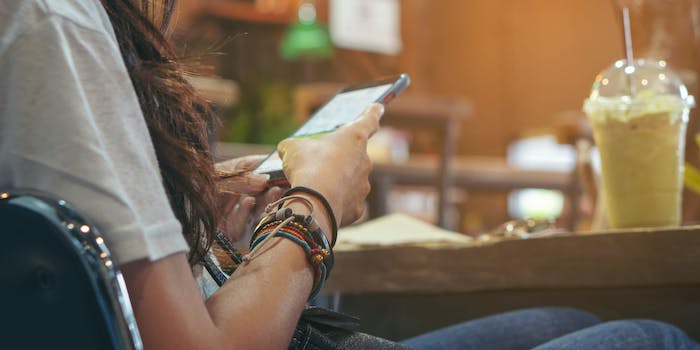 “Being triggered” is an age-old meme with the far-right crowd. Now, Twitter is joining in on the joke.

Last night, Twitter’s official account used the hashtag #TriggersMeIn4Words to quip that “edit button requests” are “triggers” for the site. On the surface, the joke poked fun at users’ ongoing interest in editing their tweets. But the hashtag plays into a much larger joke making fun of online users with trauma triggers, including sexual assault survivors, abuse victims, and individuals with post-traumatic stress disorder.

In early 2014, discussions on “trigger warnings” broke out into the mainstream. For years, trigger warnings were used in online queer and feminist communities to alert users if images or messages feature content that could trigger a post-traumatic reaction, such as a flashback. After the New York Times covered college students’ requests for trigger warnings in their classrooms, journalists, professors, and activists alike joined the larger conversation.

This spawned a wide range of jokes satirizing the use of the word “triggered” and “triggering.” As Know Your Meme points out, the word “trigger” has since been “re-appropriated as an ironic term used by [social justice bloggers’] detractors to criticize certain issues that may be seen as too trivial or irrelevant to discuss in length.” One early version of the meme used the word “TRIGGERED” under activist Melody Hensley’s image, after she claimed she experienced PTSD from sustained online harassment.

Nearly five years since their inception, “trigger” jokes are still a problem. Besides making fun of marginalized people, “trigger” jokes conflate annoyance or anger with traumatic stress, which are not the same things. After all, trauma triggers are noted psychological experiences. They’re painful and incredibly debilitating, and their existence should be taken seriously by a brand as enormous as Twitter.

“I’m glad we’ve reduced a term that PTSD and trauma sufferers needed for talking about the effects of such and watered it down into a meme that brands can hop onto now,” writer Nico Deyo said in reply to Twitter’s post. (Disclosure: Reporter Ana Valens contributes to Fanbyte, a publication for which Deyo also writes.)

I'm glad we've reduced a term that PTSD and trauma sufferers needed for talking about the effects of such and watered it down into a meme that brands can hop onto now https://t.co/7mrSSicacG

Deyo told the Daily Dot that “trigger” jokes started first as a way to mock “feminists and teens” and moved on to targeting “liberals” in general. She believes the jokes are rooted in “conservative” and “more cruel, trolling-oriented spaces” like 4chan, where it has since spread.

“A brand co-signing a joke or even just a watering down of the term is helping an end goal of the parties responsible for making it a joke: to disrupt its use by traumatized people in a meaningful way that gives them control over their own experiences,” Deyo told the Daily Dot over Twitter DM. “It gives the hashtag a huge pass.”

It's impressive that the already dumpster-tier official twitter account continues to lower the bar for posting https://t.co/pdyrrDWUyA

Please have a more world-wise group on your social media team.https://t.co/2t6ufxmUrb

If you ever needed proof that Twitter is literally designed to make money off of the impulse to troll, well, here you are. Come on Twitter. Be better than a meme designed to "own the libs" by making light PTSD. https://t.co/Fs5h1uE0Sm

One tweet made just 30 minutes before Twitter’s post has since gone viral, telling users to “stop using the word ‘triggered’ when you really mean ‘offended.'”

For the record, this isn’t the first time that the official Twitter account faced backlash from marginalized users. After Twitter’s account told users to “be sweet when you tweet,” critics were quick to point out that Twitter is filled with Nazis and transphobic harassers. Twitter clearly has problems to work out, and jokes about “triggers” aren’t necessarily the right step.

Update 2:55pm CT, Jan. 17: When reached for comment, Twitter declined to make a statement. But a source familiar with Twitter’s internal workings told the Daily Dot that the company pays attention to users’ feedback and how they engage with the platform. The source also noted that the company takes mental health issues seriously, and that Twitter has support tools and partnerships with a wide variety of both counseling services and suicide prevention organizations.