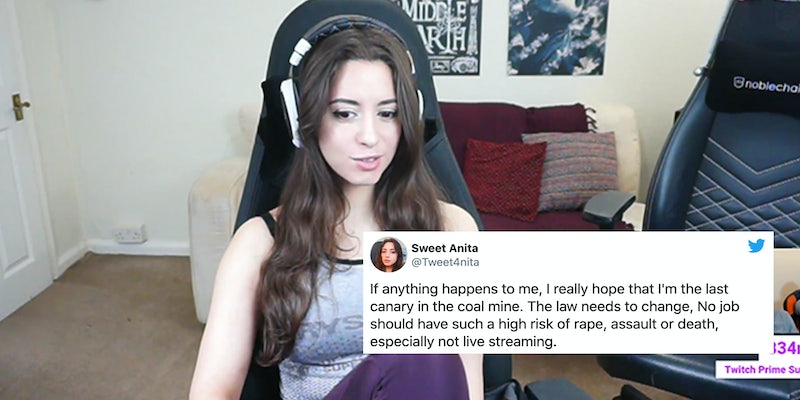 Sweet Anita, xChocoBars call out Twitch and police for inaction on online stalkers

'No job should have such a high risk of rape, assault or death, especially not live streaming.'

Multiple streamers are calling out both Twitch and the police for their inaction regarding their online stalkers.

Well-known content creators on the platform, including xChocoBars, Sweet Anita, Kaceytron, and Destiny, spoke out about the danger they face because of stalkers on Twitch.

In an Aug. 24 tweet, Twitch broadcaster xChocoBars, whose real name is Janet Rose, addressed her ongoing fear in dealing with a longterm online stalker. She said she fears being killed and feels hopeless in getting help.

“I often think about how I will prob die by the hands of my stalker and no one can do anything about it until it really happens,” she wrote. “I know it’s heavy to talk about but if it does happen I hope my death will mean something and help protect other creators from similar situations.”

Another popular streamer, Disguised Toast, followed up on Rose’s tweet, detailing how Rose has been facing her online stalker for over two years. Rose, according to Disguised Toast, went to authorities and spoke to lawyers, to no avail. Officials reportedly said there isn’t much they can do to help since no crime has technically been committed. Disguised Toast, on the other hand, believes there is an “overwhelming amount of evidence.”

Since publicly addressing the issue, Rose has taken an extended break from streaming, which she says was “much needed for my mental.” It’s the first break she’s taken from streaming on the platform for as long as she can remember.

Twitch broadcaster Sweet Anita addressed a public threat that she received from her online stalker in July, saying that she has faced traumatic run-ins with her stalker, who has become violent toward her in real life.

In one of her stream’s chat, he wrote, “I’ll kill you soon.” Anita said he previously located her at a shop and followed her with a knife. She later stated that her stalker also moved within a four minute proximity of where she lives and has slept outside of her home.

She added in a later series of tweets that she fears for her life and feels helpless in any interactions regarding the issue with law enforcement.

“The sad thing is I have had this happen before, even before streaming, and I know he won’t be the last. I’m exasperated,” she wrote. “No matter how extreme the situation, the response has always been the same. They log it and do nothing, and I feel helpless.”

Since then, Anita has connected with several other broadcasters to discuss stream stalkers and how to get help. Within each testimony, the streamers expressed the lackluster effort made by police to actually solve the problem of stream stalkers.

“I don’t ever rely on the cops for help,” streamer Destiny states in the interview. “It seems it’s kind of like, everybody’s out for themselves about everything because the police just don’t give a fuck about online shit at all.”

As a Dexerto report exploring the issue claims, “the line between real-life interactions and these parasocial relationships are ever-blurring,” and as evidenced by streamer testimonies, the lack of boundary creates grave danger in real life for creators who have heavily leaned into bringing their persona online.