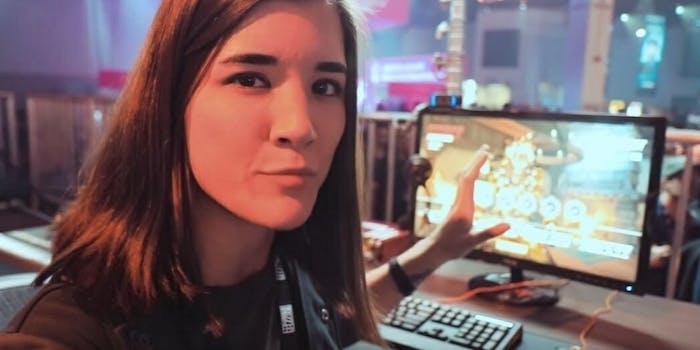 One man calmly told her, 'I hope you die.'

As Twitch streamer Alinity Divine feuded publicly with YouTube’s most popular star, PewDiePie, leading to oodles of social media harassment for her, a female gamer was facing her own verbal harassment for having the nerve to be a women who is also a gamer.

Twitch streamer Anne Munition recently posted a video detailing exactly how her male counterparts react when they realize they’re gaming with a female. Some seem surprised. And some are outright nasty.

Once they determined Anne Munition is a woman in the video below, one said, “You stole my fucking content. You’re shit at the game. Get out now.” Another said, “We’re not being like this because we don’t like women. We’re being like this because you’re shit, by the way.” Another commented, “Are you playing the right video game, miss? This isn’t like League Of Legends or that shit where you can just flash your titties on stream. It takes skill.”

She was also called “gamer trans” and “tranny bitch.” Another person said, “I hope you die.”

"Why don't you use voice chat?"
"Why can't I find a girlfriend who plays video games?"
"Why do you mute people who ask you if you're a girl?"

Anne Munition has more than 335,000 followers on Twitch and about 33,000 subscribers on YouTube. As Kotaku notes, she plays games like Rainbow Six, PUBG, God of War, and Overwatch.

She’s also effectively making her point with the video above. It’s been viewed more than 560,000 times.

The video doesn’t show her responding back to any of those misogynistic comments, but this is a story that continues to play out for Anne Munition and plenty of other women who game.

“While I understand everyone, of all genders and backgrounds, can often be the subject of toxicity online, I really feel like people underestimate just how bad it can be for women or people who are recognized as ‘other’ over voice comms,” she told Kotaku.

“I feel like there are a lot of expectations for streamers not to complain about anything ever and that we should just be positive and ‘good vibes’ only. When these types of things happen, I just think about all the young people (boys and girls) who experience this type of abuse online and don’t have the tools to stand up for themselves other than to mute people and pretend everything is fine.”

One of the male gamers she played with ended up apologizing to her in a now-deleted tweet and said his words were “meaningless” and had “no substance.” Anne Munition responded by saying, “I appreciate that you want to apologize. But man, you went HARD just because you heard a woman’s voice… You called me a ‘fucking tranny bitch’ and told me to kill myself. Over nothing. All I did was exist.”