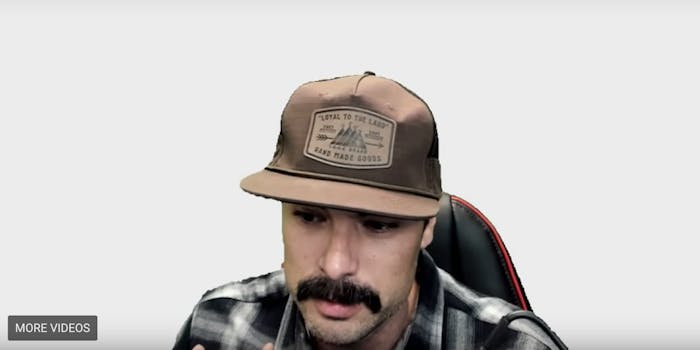 He said he plans to take some time off to focus on his family.

Popular Twitch streamer Dr. Disrespect announced in an emotional livestream that he plans to take an indefinite hiatus from the gaming community on Thursday.

Through tears, the Twitch streamer whose real name is Guy Beahm admitted he cheated on his wife and needs to take time to focus on his family now.

“I just want to be completely transparent with you guys,” he said. “As you guys know I have a beautiful family, and a wife and kid. I want to be transparent that I’ve been unfaithful… And I’m probably going to be taking some time away—some time off—to focus on… stupid fucking mistakes, man.”

The Twitch streamer has been best known for his broadcasting of games including PlayerUnknown’s Battlegrounds, H1Z1, and Call of Duty. He was just recently fan-voted the trending gamer award at the Game Awards on Dec. 7. He also won streamer of the year at the Esports Industry Awards.

Beahm’s fans have had mixed reactions to his announcement; on Reddit, some said they were incredibly disappointed in him while others lauded his decision to own up to his mistake. Other fans voiced their feelings on Twitter.

What Dr Disrespect did is among the shittiest things you can do in life. I feel awful for his family, and his community. I respect though, that he was completely honest and transparent with his community. Took some balls. Hopefully that relationship can be mended.

We were all rooting for you Dr. Disrespect. UGHHHHHHHHH pic.twitter.com/AD18SQ31o5

The Doc just started a stream to announce that he had been unfaithful to his wife. y’all he wont be back for a while he says he is going to take some time to focus on his family. @DrDisRespect take all the time you need. We know this not who you are. Hoping things will get better pic.twitter.com/If5vPGRBBk

One Reddit user pointed out Beahm was recently praised for helping out a depressed fan a few weeks ago.

“Seemed like a lot of people looked up to this guy, disappointing when this sort of stuff comes up from a person you’d never expect it from,” they wrote. “Rest in peace to his reputation for all of the future.”