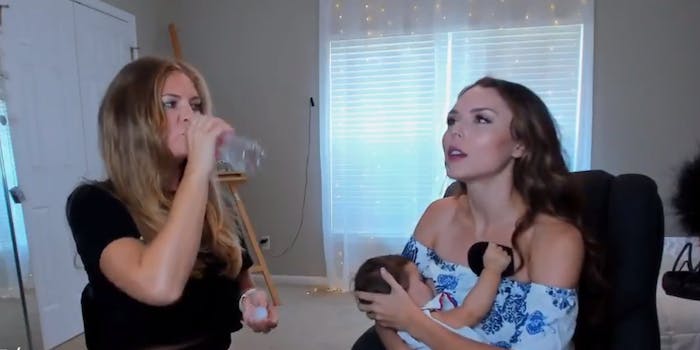 Twitch says breastfeeding is allowed on its streams

The decision comes after a streamer had clips of her breastfeeding taken down.

After over a week of controversy and debate, Twitch officially announced that breastfeeding is allowed on their platform, reports Polygon.

In many places around the world, breastfeeding is considered no big deal. New parents are given space and time to pump breastmilk at work and can breastfeed their babies in public without fear of harassment or judgment.

For this reason, Heather “HeatherEffect” Kent, a YouTuber and streamer, wasn’t trying to make a statement or expecting a backlash when she breastfed her baby daughter during a livestream on Twitch on July 24 while talking to her friend. In fact, she told Kotaku that she is, “not really a huge political movement type of a person.”

But when clips of her breastfeeding got taken down, and people piled on, Kent said she felt shocked.

“It’s actually put me in a corner where I feel like I actually need to take a stand for this,” said Kent to Kotaku. She took to Twitter to try to fight Twitch’s decision, and educate people.

The fact that I even have to share this. SMH.

More than a week later, Twitch finally responded to Kent’s appeal. To her joy, they agreed with her.

According to the email from Twitch, “The Safety Ops team responded to reports of Adult Nudity and in this case, there was a brief moment under question so the clip was removed. At that time, it was a difficult position for a Safety Ops admin to be put in during a review of an incident that has not previously occurred on Twitch.”

If by “incident” they mean visible breastfeeding, this is not technically true.

As Kent pointed out on Twitter, Twitch streamed the Mister Rogers’ Neighborhood episode about breastfeeding, which included exposed nipples.

“You violated ToS”
“Breasts are sexual”
“Think of the children”

Where was the outrage when Twitch streamed the Mister Rodgers’ Neighborhood episode about breastfeeding ON THE FRONT PAGE?

⬇️ The nipple that was on the front page. pic.twitter.com/fJU9nM7Svj

Regardless, Kent breastfeeding her daughter on stream forced Twitch to come to an official position on the matter of people using boobs for their intended purpose.

“After further discussions between Partnerships, Safety Ops and Trusty and Safety there is alignment between all teams that breastfeeding is not and will not be against the ToS. As you so eloquently put it ‘breastfeeding is not lewd’ and we agree with you,” wrote Twitch in the email to Kent.

Twitch stated that they will be updating the Community Guidelines to reflect this decision.