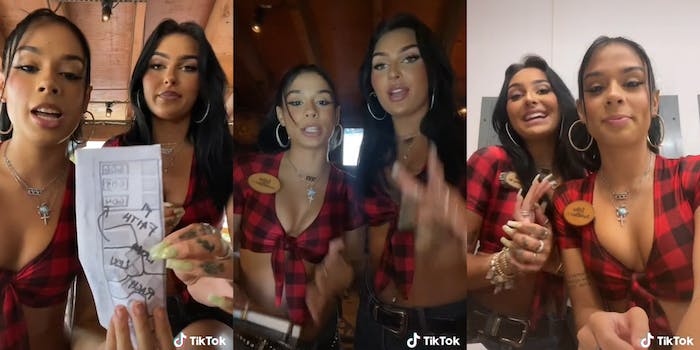 A couple who work at a Twin Peaks location went viral after sharing how much they made in a day in tips.

For context, Twin Peaks is a sports bar and “breastaurant” chain where servers are “outfitted in midriff-and-cleavage-revealing cropped plaid shirts and khaki-colored shorts,” per a 2020 article by Mashed, though the uniform seems to now include denim shorts.

In the now-viral TikTok posted by user Erika (@erikavfr123), Erika and her partner Faith count up their tips over the course of a Saturday night.

The video now has over 1.4 million views.

By the end of the video, Faith made $423, while Erika herself made $275, though she notes that there were several issues during her shift that impacted that total, including a walkout.

Faith also emphasizes that it was “not the normal Saturday,” though both noted that the restaurant was busy.

On average, servers earn around 60% of their income from tips, according to a 2018 article from the National Employment Law Project. The same article details that “the median monthly tip earnings for wait staff and bartenders are $867,” which means that, on average, Faith and Erika would exceed the median tipped monthly income after just three Saturdays given similar workloads.

All told, according to Indeed, servers at Twin Peaks can typically expect about $12.87 per hour, though exact figures are difficult to determine given variances in tips.

In the comments section, users supported the couple while sharing their own salaries.

“​​I make 400 as a cashier ever[y] WEEK after working 35 hours,” one user shared. Many people in response stated that this person should become a server instead, with one user promising that they “[wouldn’t] regret it.”

“This is a power couple right here,” a second commenter added. “Get y’all money and spoil each other.”

Some users rejected the idea that Faith and Erika were a couple. In response, Erika shared a video of them enjoying a boat trip together.

This led to a flurry of support from users, despite the detractors.

The Daily Dot reached out to Erika via TikTok comment.