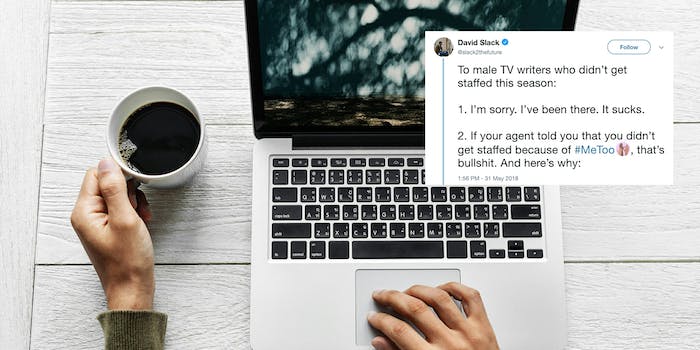 'A woman didn't take your job.'

Plenty of people see the #MeToo movement as a force to call out inequalities, hold wrongdoers accountable, and raise voices that for so long have gone unheard. But others have seen the viral campaign and national conversation about sexual harassment and assault as a convenient scapegoat.

The latter group prompted TV writer and producer David Slack to write a Twitter thread that went viral on Thursday. Slack, who has written for Law & Order and Teen Titans, called out fellow male writers (and their agents) for blaming #MeToo as the reason they didn’t land a staff job for the coming television season.

After acknowledging that he has been in the position of missing out on jobs himself, Slack got to the point: “If your agent told you that you didn’t get staffed because of #MeToo, that’s bullshit.”

In seven subsequent tweets, he laid out the reasons why.

A woman didn’t take your job. One of the many, many other men who got staffed this season took your job.

As Slack implies, many writers have probably heard from their agents that the industry’s response to #MeToo has been to push for more women and minorities in media roles, especially in the writers’ room, thus pushing young men out of jobs. But, Slack explains, the slow evolution of attitudes has yet to make a dent on preexisting male-dominated structures.

“While there are now a few shows with all-female or majority-female writing staffs, the overwhelming majority of employed TV writers are still male,” Slack wrote. “By telling you a woman took your job, your agents aren’t just furthering sexism and misogyny in our industry; they are trying to blind you to the real reasons you didn’t get staffed.”

By telling you a woman took your job, your agents aren’t just furthering sexism & misogyny in our industry; they are trying to blind you to the real reasons you didn’t get staffed. And that does you a huge disservice.

Slack slammed writers with the cold, heart truth: If they don’t get a job, it’s because they weren’t the best writer up for it.

If you didn’t get staffed, it’s because you got outcompeted, plain & simple. Other writers, both men & women, had better samples, better recommendations, & better meetings. It’s okay. I’ve had years where I got outcompeted, too.

But like any good mentor, Slack followed up his truth syrup with sage advice: “If you focus on raising your game instead of buying into the bullshit that the system is rigged (it’s not), that next job will come your way.”

If you focus on raising your game instead of buying into the bullshit that the system is rigged (it’s not), that next job will come your way. Trust me.

Hope this helps, & I wish you the best of luck.

Slack’s words seemed to resonate with many writers and industry figures, including actress and #MeToo advocate Patricia Arquette.

Thank you for this thread.

As his thread gained viral momentum, Slack realized the irony that he was only repeating what women have been saying for a long time. He followed up with more great advice: “Listen to women when they say things the first time.”

The fact I’m getting credit for saying things plenty of women have been saying for years is only further evidence of the problem. Listen to women when they say things the first time.