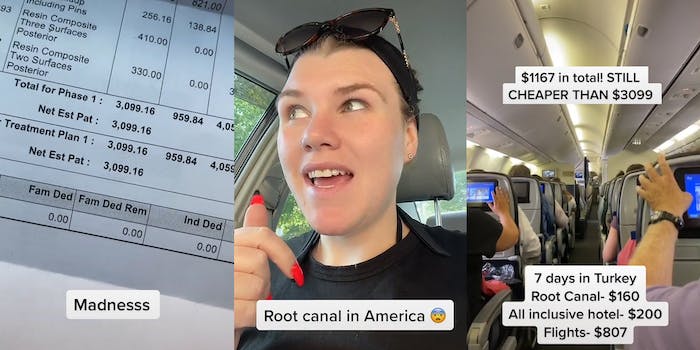 ‘American health system is a joke’: TikToker flies to Turkey to avoid paying over $3000 for a root canal in the U.S.

'That is why my family mostly go to Mexico to get it fixed if they can.'

A TikToker’s video showing the difference in the cost of medical care between the U.S. and Turkey has drawn 2.8 million views, as well as commentary on the American healthcare system.

In her video, user @asdeliadoes, an Irish woman living in Georgia, shows that she was quoted over $3,000 for a root canal procedure—and that’s after any insurance coverage.

Instead of spending this money, @asdeliadoes booked a root canal with a Turkish dentist, a flight, and a stay at an all-inclusive resort for just over half the cost she was quoted in America: $1,167. The root canal itself was $160, with around $800 spent on her flights and $200 went to her seven-day hotel stay.

@asdeliadoes My dentist wanted $3099 for a root canal so I booked a week in Turkey to get it done here! Came to less than $1200. So I get a root canal and a holiday now 😂🇹🇷❤️ #turkey #lastminutetrip #manifestation #dental #kusidasi #graitude ♬ original sound – Delia O’Malley

“I went to Dental Cosmetic Kusidasi,” she wrote in her comment section. “I highly recommend them. I had two veneers done there in 2022 and they did a great job. Very professional!!”

With her bags packed and ready for her trip, @asdeliadoes tells her viewers, “I can’t believe I’m actually doing this.”

“All the ‘that’s not bad’ people are so brainwashed, I swear,” one commenter wrote. “It is bad. With insurance?! Guys. Come on.”

“America is so profit driven it’s sad that people go bankrupt trying not to die,” another commenter wrote.

“Everyone defending that it’s for multiple services, failing to realize that all those services still shouldn’t cost that much,” a commenter wrote.

“Why people aren’t doing this more?” one commenter wrote. “I went to Poland to have an implant, with three kids, stayed at a hotel for a week, went shopping and still saved money.”

“Canada here,” another commenter wrote. “No, dentistry is not covered here. My dad did the same but went to South America lol.”

“American health system is a joke,” a commenter wrote. “I get my healthcare when I go home to Turkey”

The Daily Dot has reached out to @asdeliadoes via Instagram DM regarding the video.