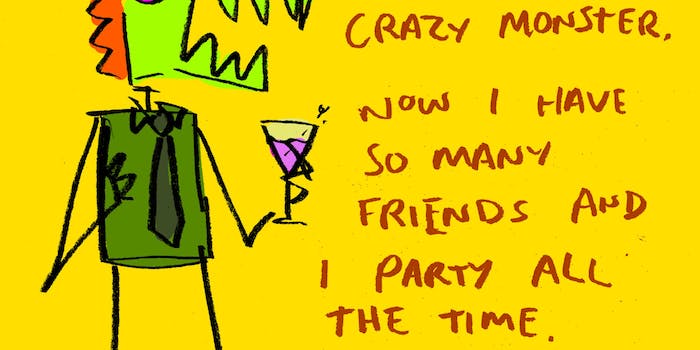 For a new project called Storyboard, Tumblr wants to gets personal.

On October 9, Christopher Price—known on Tumblr as topherchris—took to his personal page with the story of how he parlayed his tumbling hobby into a career.

In early 2009, I was a burned-out web developer in sunny St. Pete, Florida, secretly fascinated with my popularity on this thing called Tumblr.
That’s when I got an email from Tumblr’s president, asking if he could fly me to New York to meet in person. He wanted to talk about how I might be able to help the company.

“What’s your Tumblr story?” he posted last week. “We want to know—and if you’re game, your story could become part of Storyboard, a big secret project we’re working on.”

Contributing to Tumblr’s Storyboard is easy: Post your story (or GIF, video, or any other type of media that Tumblr supports) onto your own page with a “storyboard” tag. (Those who want to submit privately can do so through this Google doc.)

What Storyboard will become is still a mystery, but the project is underway and has already tallied a diverse array of life’s lessons and leads. (Price did not return a request for comment.)

Some notes are long memories of the day they found their tech community calling, while others are short and explain how Tumblr helped someone discover an appreciation for art.

Each carries a similar message, one touched upon by Tumblr user aquaticwonder:

“I’ve met so many kind people who actually care about me and it made me realize that my world extends farther than the constraints of my own town. It’s been amazing.”