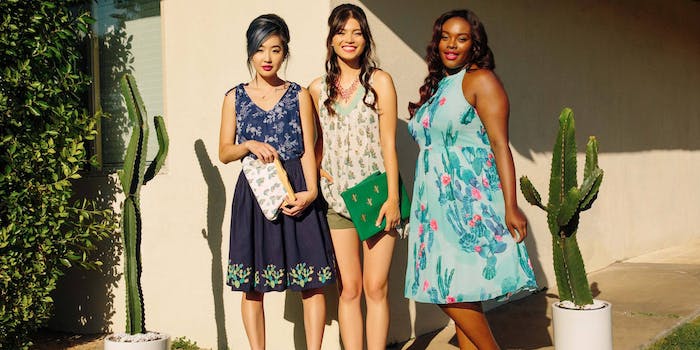 While we're at it, maybe make fashion more diverse, too.

At this point, everybody knows that most of what they see in fashion magazines is, at best, a half-truth. Consumers regularly skewer the unrealistic images of models Photoshopped into oblivion, and many celebrities and models are using their platforms to call out how their own bodies have been altered.

Now representatives and fashion brands are teaming up to support the Truth in Advertising bill, which could take us one step closer to an un-altered fashion world. But could that really lead to more truthful representations?

This week, online retailer ModCloth is partnering with Rep. Ileana Ros-Lehtinen (R-FL), Rep. Lois Capps (D-CA), and Rep. Theodore E. Deutch (D-FL), the sponsors of the Truth in Advertising bill, to raise awareness about the harmful effects of Photoshopping. The bill calls for the FTC to produce a report on “a strategy to reduce the use—in advertising and other media for the promotion of commercial products—of images that have been altered to materially change the physical characteristics of the faces and bodies of the individuals depicted.”

In 2014, ModCloth became the first retail brand to sign the Heroes Pledge for Advertisers, vowing not to “materially change” any images of their models. That means they won’t change a model’s “shape, size, proportion, color, removal and/or enhancement of individual features.” “What we see in advertisements and fashion magazines colors our expectations, even if those images are unknowingly altered,” said Rep. Capps in a press release. “This especially affects young people who internalize this unrealistic ideal of beauty—leaving them at risk and vulnerable.”

According to a study from Westminster College, “the mass media’s depiction of women portrays a standard of beauty that is unrealistic and unattainable for a majority of women in society.” This happens not only through Photoshopping women to be skinnier or more toned than they actually are, but by altering images of bodies to the point where they could not exist in real life. For example, when Target’s online store featured an image of a teenage model who looked like she had a chunk taken out of her arm. Or these images:

Susan Koger, ModCloth’s founder, says that not altering images of their models is a natural fit for the company. “We put our community at the center of everything we do, and we try to do our very best to reflect the diversity of the beauty that exists in our community, in our campaigns, and in our model imagery,” she told the Daily Dot.

Many mainstream brands have made the push to be more inclusive in their imagery. Dove cosmetics regularly runs ads with women of various shapes and colors as part of their “real beauty” campaign. Actress Vanessa Hudgens declined to be Photoshopped in an ad campaign for Bongo. And Aerie ran a lingerie campaign featuring un-touched models.

However, vowing not to Photoshop models only goes so far when those models still fit mainstream beauty standards. A look at the Aerie campaign certainly shows a few more skin folds and under-eye circles than we’re used to seeing in fashion ads, but the women are still skinny, still light-skinned, still visibly able-bodied, and still conventionally beautiful. Campaigns like that prove that Photoshop is not the problem. It’s what companies and marketers believe an “acceptable” body looks like—and perhaps what consumers think it looks like—that is the problem.

“Twenty years ago, the only human bodies I’d see represented were on TV and in ads,” says ModCloth’s founder, but with social media, “I get to choose my own tastemakers and be a tastemaker myself.”

Proof of these expectations can be found all over social media. A few weeks ago, Facebook removed a photo of a plus-sized model, claiming it violated their “health and fitness” policy, and that it depicted “a body or body parts in an undesirable manner.” And when model Stina Sanders posted photos of herself without makeup and bleaching her upper lip to Instagram, she lost thousands of followers. If people are reporting and unfollowing “real” images like this, is Truth in Advertising—no makeup, no touch-ups, and a diversity of bodies—really what we want to see?

Even ModCloth, though they do show a diversity of models, relies heavily on user-submitted images of customers wearing their clothing, so users can see their outfits on an even wider range of bodies. And while not being able to represent everyone is a fact of logistics—”We can’t shoot everything on 60 different body types, and even if we did that, we wouldn’t be showing the full range,” says Koger—it still puts the onus on the underrepresented to see themselves represented.

“Facebook and Instagram lean on their communities to help moderate content. And while we’re making progress, there are totally people out there who see anything that veers from the norm of beauty and get upset by it,” says Koger. But that’s exactly why she believes the bill is important—to start normalizing this sort of imagery. “Diverse representation makes it less of an issue. But until it’s normalized, we’ll have to continue to make a stand, and say that this is what we want to see in media.”

Koger does believe that real diversity is what people want to see—and what consumers have been searching for outside of traditional media. “Twenty years ago, the only human bodies I’d see represented were on TV and in ads,” says Koger, but with social media, “today I get to choose my own tastemakers, choose my own media, and be a tastemaker myself.”

Change has been happening, slowly. Target has recently featured TV ads with model Jillian Mercado, who is a wheelchair user. Thinx panties ads now feature a trans model in their underwear. And consumers are voting with their dollars. That Aerie campaign, flawed as it was, still boosted the company’s sales by 9 percent.

Yet, in an ideal world, advertising choices shouldn’t solely be a matter of what is known to sell, because skinny people always sell. Representation in retail should be diverse because that’s what clientele looks like—and also because it’s fair. Fashion is about aspiration imagery, says Koger, but that “aspiration” cannot just be about being the skinniest, whitest, most conventionally beautiful person. “That aspiration is someone who feels confident and beautiful in who she is, and that can take lots of different forms,” says Koger. Hopefully more companies will realize that, bill or no bill.