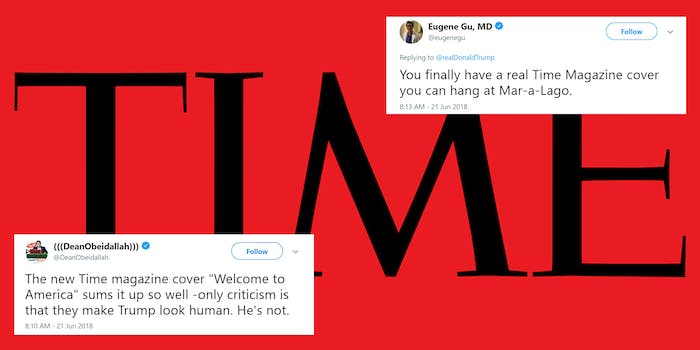 Trump probably won’t be a fan of this one.

As anger continues to mount against the horrifying child separation policies of the Trump administration, Time magazine has created a cover that many say perfectly encapsulates the situation.

TIME’s new cover: A reckoning after Trump's border separation policy: What kind of country are we? https://t.co/U4Uf8bffoR pic.twitter.com/sBCMdHuPGc

The cover features a stone-faced Trump staring down at the now-famous 2-year-old Honduran girl from the viral photo of her crying as her mother is searched by a border patrol agent. The striking use of these two images together exemplifies the debate around immigration, family separation, and the “zero tolerance” policy, which the Trump administration instituted in early May. This new move to prosecute every person who attempts to cross the southern border has resulted in the separation so far of over 2,300 children from their families.

People have been reacting to the new cover and what it says about the legacy Trump will leave.

Puerto Rico is Trump's Katrina, this is his Auschwitz.

Welcome to America. We kidnap your kids. What a brutally honest and shocking Time Magazine cover. pic.twitter.com/QJvOFUsxDI

What kind of country are we?

Some users have noted Trump’s past obsession with being on the cover of Time magazine, a preoccupation so intense that, at one point, he had fake Time covers hanging in at least four of his golf resorts. Something tells us that he won’t be as fond of this latest real cover story.

Cover of Time. Trump will probably be psyched he is on it, especially looking so trim. pic.twitter.com/QLNotTYSDN

The accompanying story to the cover by Karl Vick, titled “A Reckoning After Trump’s Border Separation Policy: What Kind of Country Are We?” describes the way that Trump is changing the perception of what America is, not just for Americans, but also for the world. Vick notes that since Trump’s inauguration, the president has said “’equality’ only 12 times and ‘human rights’ just 10 times.”

However, some have criticized the story and the cover for its treatment of the subjects they are representing, for not taking a hard enough stance on the policy’s connection to white supremacy, and for exploiting the trauma of immigrant children for shock value—especially given this morning, BuzzFeed News reported that ICE doesn’t know the Honduran child’s name or current whereabouts.

I do wish that @karl_vick’s story was as explicit as the @TIME cover to which it is linked, connecting family separation to white supremacy. But it is quite striking nonetheless. “Presidents have many jobs,” Vick begins, “and one is telling us who we are.” https://t.co/tX0f2weXUJ pic.twitter.com/e1pUmD1KiJ

But now taking the little girl out of context and placing her under the gaze of Trump is seen as a brave and bold move.

Can you imagine her mother seeing this cover? Do we need to exploit this child's nightmare any further?

Trump has yet to comment on the cover, but given his usual disdain for media criticism, it’s likely only a matter of time. Whatever he says in public, we can be fairly certain this cover won’t be hung in even one of his resorts.