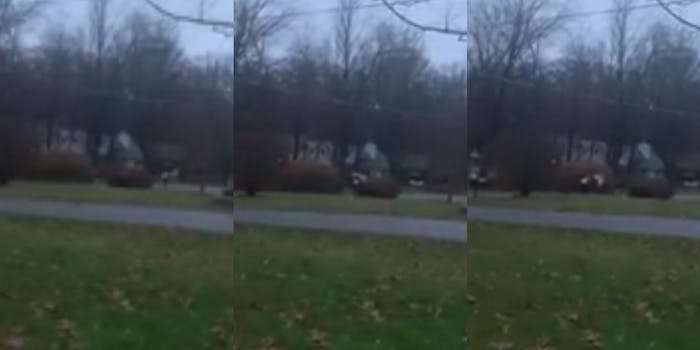 A video shared to Reddit shows a lone supporter of President Donald Trump in New Jersey singing a Trump-themed rendition of “America the Beautiful” early in the morning.

The video, which has over 43,000 upvotes on Reddit, shows a woman carrying a Trump flag, singing “America, the Beautiful” with revised lyrics about Trump and “four more years” interspersed in the lyrics and chorus.

A young child trails behind the Trump supporter, having to endure her twisted idea of patriotism.

The redditor who posted the video wrote, “I haven’t spoken to her before, and definitely won’t try to after this. I’m in a very red section of a predominantly blue state, so this behavior doesn’t surprise me at this point. I posted this to a local Facebook group as well, and half the posts were cheering her on.”

Some commenters, including the original poster, wondering if the child’s life was in danger. Others commented on the “cultish” nature of Trumpism.

“It is absolutely on-brand for the Trump cult to declare themselves patriots and protectors of America as they literally rewrite the anthem to praise Donald Trump,” wrote u/Dottsterisk.

Moreover, Trump supporters have been willing to die on an evaporating hill. According to the Washington Post, recent polling from the Economist and YouGov shows “the extent to which Trump voters accepted his false assertions” that President-elect Joe Biden’s win is a sham.

Participants were asked if they thought that Biden had legitimately won; about six in 10 respondents said he had. However, among those who voted for Trump, 86% said it wasn’t legitimate. When asked if Trump should concede, the data were comparable: Eight in 10 Trump voters said he should not give up.