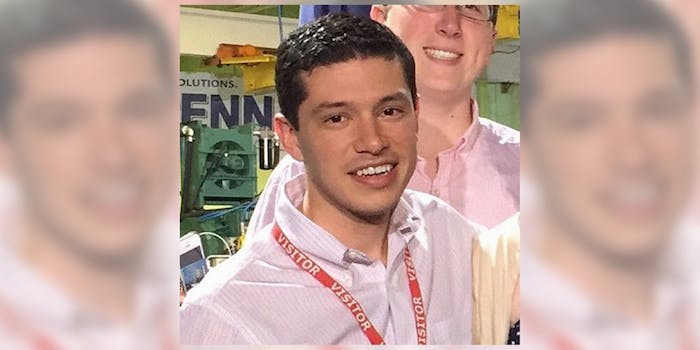 A State Department official appointed by the Trump administration was previously accused by multiple students of sexual assault, a report from ProPublica reveals.

In January, President Donald Trump hired Steven Munoz as the assistant chief of visits, a role that requires him to organize visits between the president and political leaders from around the world while supervising staffers. But back when he was a student at South Carolina’s the Citadel military college less than a decade ago, Munoz allegedly abused his power as class president and head of the Citadel’s Republican Society to lure and molest five freshmen males.

“Munoz coerced, threatened, and convinced me to allow inappropriate touching, grabbing, and kissing by leading me to believe it was what I needed to do to gain acceptance in the corps of cadets,” one victim told South Carolina police, according to ProPublica. “He threatened to call my upperclassmen who would be upset if I did not comply with him.”

Another student reported that Munoz repeatedly pressured students into sexual contact and yelled at students who resisted. In one case, an anonymous student was repeatedly groped by Munoz during a series of leadership meetings.

“After a few meetings he began to rub my leg with his hand,” the student said. “He moved his hand under my shorts and the first time I pushed his hand off my leg he said he was just playing and that he did it with his other [freshmen] so I shouldn’t mind.”

A timeline from ProPublica reveals a series of assaults throughout Munoz’s college career, beginning in April 2009 and ending in spring 2011—months before Munoz graduated that May. The Citadel concluded that “certain assaults likely occurred,” but minimal action was taken against Munoz while he was still a student. After Munoz graduated, other victims reported their assaults, leading the Citadel to ban Munoz from the college and contact the state police to begin an investigation.

However, after state police sent their investigation to the office of the prosecutor, Solicitor Scarlett Wilson ultimately passed on seeking indictments. According to her, this was because there was “no probable cause that he committed a crime prosecutable in General Sessions Court.”

Munoz’s hiring raises serious questions about the White House’s vetting process. Previously, in the Obama administration, potential personnel candidates would go through an extensive background check, one that would certainly rule out a candidate for hire based on a history of sexual assault allegations. Munoz’s appointment may signal a radical departure from background vetting, one that hires based on political viewpoints and favoritism over a spotless personal and criminal history.

Overlooking Munoz’s allegations also represents a continuation of Trump’s so-called “locker room talk” defense, a claim the then-presidential candidate used to excuse himself after a video surfaced showing him admitting to “grabbing women by the pussy.” Trump also degraded multiple women who accused him of harassment and assault, saying, “Look at her,” in reference to one woman who he deemed not attractive enough to have sex with.

In 2012, Munoz’s defense attorney, Andy Savage, echoed some of these sentiments, pointing to a so-called culture of locker room talk at Citadel.

“I believe that certain disgruntled cadets made exaggerated claims of wrongdoing concerning Munoz’s participation in boorish behavior that was historically tacitly approved, if not encouraged, by the institution,” Savage said, according to ProPublica. Savage instead suggested the victims were “pressured to report interactions that the cadets considered typical barracks banter as if they felt it was inappropriate.”