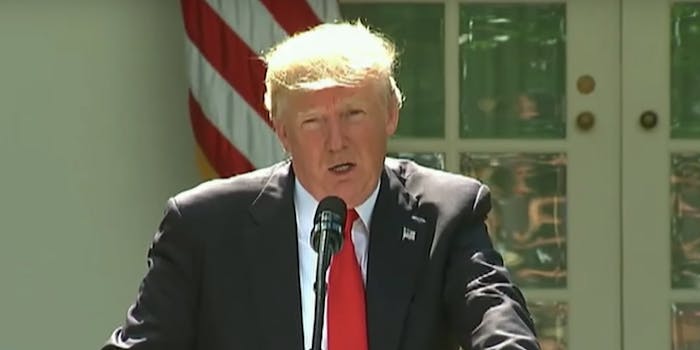 Over 44,000 people signed a letter saying President Donald Trump is not welcome in Pittsburgh until he publicly condemns the white nationalist movement, the Hill reports.

Read our demands to @POTUS after a gunman killed 11 of our brothers and sisters at #TreeOfLife #DorHadash and #NewLight in Squirrel Hill, Pittsburgh. If you are so inclined, please sign your name in support. https://t.co/pVytT2a9Sz

Progressive Jewish leaders of Bend the Arc issued the open letter on Monday asking Trump and the Republican Party to “denounce white nationalism, stop targeting and endangering all minorities” and “cease assaults on immigrants and refugees” as part of the requirements to show face in Pittsburgh.

On Saturday, 11 congregants were killed by a gunman at the Tree of Life synagogue in Pittsburgh. As a response, the Pittsburgh chapter of Bend the Arc wrote in its letter that Trump has made Jews, people of color, Muslims, and the LGBTQ community feel unsafe.

“The Trump administration, the Republican Party and their enablers—at all levels—have fomented hate, fear, and white nationalism in our country,” the letter states. “President Trump, you are not welcome in Pittsburgh until you commit yourself to compassionate, democratic policies that recognize the dignity of all of us.”

On Twitter, people agreed that Trump has no right to go to Pittsburgh if the people of the city don’t want him there.

I guess he'll never be welcome in Pittsburgh then because I don't believe he is capable of being a compassionate, descent human being!! Is it possible to send him a letter stating he's not welcome in the United States until he changes his ways?!?!🤔🙄

Excellent & brave letter! All politicians should take note of this & all communities should follow suit. Enough is enough. This is not the leadership our country needs. His behavior is UNACCEPTABLE. Period. Everyone should follow this brave stance & demand change. Words matter!

Pittsburgh Mayor Bill Peduto told Politico on Sunday that it should be “up to families themselves” whether Trump is allowed to attend any of the memorial services for those killed at the synagogue.