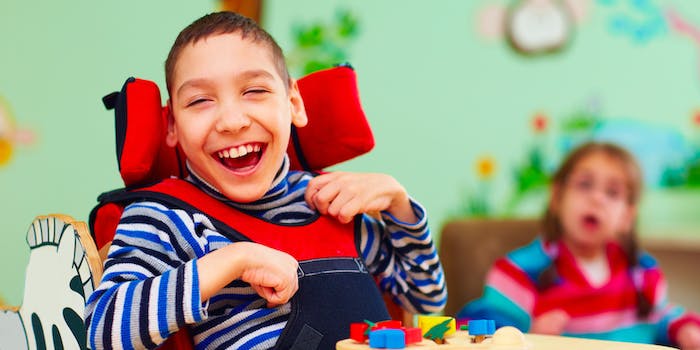 The Trump administration’s war on people with disabilities

Corey Lewandowski's 'womp, womp' comment is on par with Trump's behavior and policies.

It can be hard to keep track of all the oppressed and disadvantaged groups the president is targeting; every angering, heartbreaking news cycle brings a new one into focus. But while his attacks on women, racial minorities, and LGBTQ folks have been well-documented, we shouldn’t forget the administration’s continued antagonism toward people with disabilities.

To remind us of the contempt displayed by Trump’s inner circle, the president’s former campaign manager Corey Lewandowski appeared on Fox News Tuesday night to defend the administration’s immigration policy. When another panelist, Democratic strategist Zac Petkanas, told a story of a “10-year-old girl with Down syndrome who was taken from her mother and put in a cage,” Lewandowski responded with a smug “womp, womp,” shocking his fellow pundits and the public with his callous disregard for human suffering.

While revolting, Lewandowski’s shouldn’t be a surprise. The Trump administration has been marked by a pointed disrespect toward disabled people, a trait that manifests itself both in the behavior of the president and his staff, and the policies they pursue.

Long before his candidacy, Trump had repeatedly mocked deaf actress Marlee Matlin when she competed on Celebrity Apprentice, according to a report from the Daily Beast in 2016. Former co-workers claim that Trump called her “retarded” and made sexual comments about her when she was a contestant on the show.

In November 2015, Donald Trump set the tone for how his administration would handle disabilities when he mocked reporter Serge F. Kovaleski, who had been critical of Trump when he worked for the New York Post. While referencing him at a campaign rally in South Carolina, the candidate made a gesture mocking the reporter’s arthrogryposis, a condition that limits joint function.

Then there is what Trump has done in his official capacity as president and what policies his administration and fellow Republicans have actively pursued to match his personal disregard for people with disabilities. Speaker Paul Ryan’s American Healthcare Act (AHCA), backed by Trump and which narrowly failed last year, included deep cuts to Medicaid that targeted disabled people.

ADAPT, a nationwide network of disability advocates, was a key group in defeating the bill. Images and videos of ADAPT activists being dragged out of congressional offices as Republican lawmakers looked on with apparent disinterest went viral, and the group’s protests and public actions made headlines across the country, helping to turn the tide against the Obamacare replacement.

Bill Cassidy is literally yawning as protestors are carried away. pic.twitter.com/TqINKjrLx6

While the AHCA, and ADAPT’s incredible response to it, has been the biggest story around disability policy under Trump, it is not the only instance in which the Trump administration has targeted the disabled.

Attorney General Jeff Sessions has habitually attacked protections for people with disabilities while in office. Last December, Sessions rescinded 10 guidance documents on disability rights. One of the texts protected workers as they moved from sheltered workshops into an integrated economy from workplace segregation. Others loosened standards for service animals and building accessibility.

Several months after Sessions’ rollbacks, the House passed a bill that would make sweeping changes to the Americans With Disabilities Act (ADA). Opponents of the bill, called the ADA Education and Reform Act, argued that it would effectively gut the ADA by removing incentives for corporations to follow the decades-old law. Additionally, the bill would create serious barriers for victims wishing to file grievances against offending companies. The bill stalled in the Senate thanks to Tammy Duckworth (D-Ill.), who helped whip enough votes to stop it. Sen. Duckworth, who is wheelchair-bound due to an Iraq War injury, has become a passionate advocate for those with disabilities, particularly her fellow veterans who continue to suffer war-related injuries.

Not to be outdone by her administration cohorts, Education Secretary Betsy DeVos rescinded over 70 guidelines in the fall of 2017 that protected those with disabilities while in school. DeVos’ move to reevaluate these guidelines was a direct result of an executive order from President Trump ordering government agencies to “alleviate unnecessary regulatory burdens.” This included removing directives on how schools should spend money allocated for special education programs.

In March, the Department of Housing and Urban Development, under the direction of Secretary Ben Carson, announced an attempt to scale back fair housing laws. This was after he had already removed the words “inclusive” and “free from discrimination” from HUD’s mission statement.

Carson’s efforts sidelined discrimination cases from a variety of groups, including people with disabilities. A specific set of cases that were held up by Carson’s order involved accessibility issues at new properties built in New York and Ohio. Other cases rebuffed by Carson were filed by veterans with disabilities.

While we might be tempted to write off Lewandowski’s callous comments as an isolated incident, a closer look at the Trump administration’s communication and policy reveals that his words were anything but isolated. The reality is that just as Trump’s presidency has been marked by attacks on racial and gender equality, his administration has prioritized invalidating the needs of the disabled, too.

You could say the administration’s policy is to take protections away from people with disabilities so that corporations can increase their profits at the expense of one of America’s most marginalized communities.