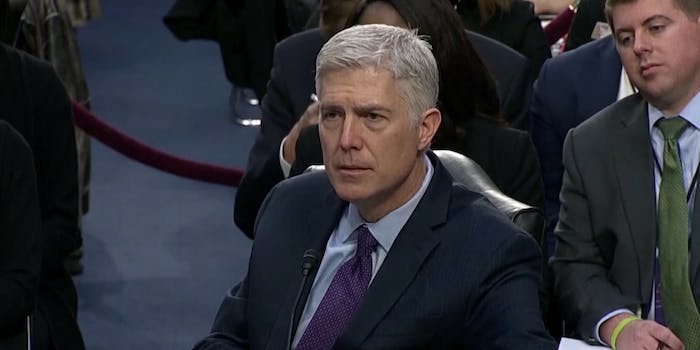 Justice Neil Gorsuch, who President Donald Trump appointed to the U.S. Supreme Court last year, sided with the court’s four liberal justices on Tuesday in a decision not to deport an immigrant who the Justice Department said committed a “crime of violence.”

According to the Hill, Gorsuch voted in favor of James Garcia Dimaya, whom the department wanted to deport over his second conviction for first-degree burglary. Gorsuch said that the Justice Department’s interpretation that this was a “crime of violence” was too vague.

Justice Elena Kagan delivered a similar opinion, referencing her 2015 ruling that found that “violent felony” was also defined as too vague and was therefore unconstitutional.

Gorsuch evoked historical precedent in his opinion, referencing the American Revolution’s charge of “treason,” which encompassed punishing even an expression of opinion.

“The founders cited the crown’s abuse of ‘pretended’ crimes like this as one of their reasons for revolution,” Gorsuch said. “Today’s vague laws may not be as invidious, but they can invite the exercise of arbitrary power all the same—by leaving the people in the dark about what the law demands and allowing prosecutors and courts to make it up. The law before us today is such a law.”

The case was left over from 2016, when, after the death of Justice Antonin Scalia, the court hit a 4-4 deadlock.