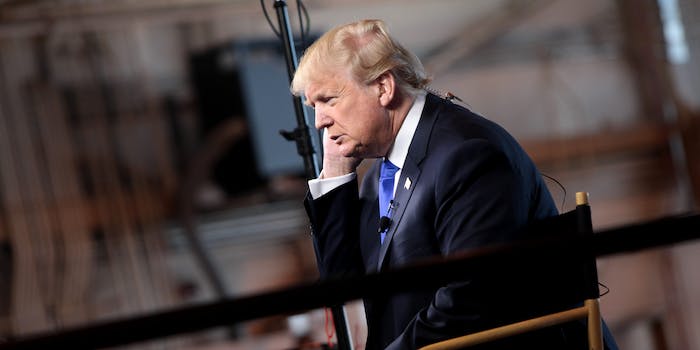 For starters, the author claims Trump likes to get his friends' wives 'into bed.'

Michael Wolff’s new book, Fire and Fury: Inside the Trump White House, is making headlines this week thanks to a series of shocking claims regarding President Donald Trump’s administration (like Steve Bannon calling Donald Trump Jr. “treasonous”). But also noteworthy are the number of disturbing details about Trump’s demeaning behavior toward women.

In one section outlined by NBC’s Katy Tur, Wolff describes Trump as someone who thinks life is “worth living” for “getting your friends’ wives into bed.” He claims Trump would manipulate a friend’s wife into thinking her husband is unfaithful, then proceed to call said husband into his office and ask him loaded sexual questions while his wife listens in through the speakerphone.

“Once the friend arrived, Trump would engage in what was, for him, more or less constant sexual banter,” Wolff explains. “Do you still like having sex with your wife? How often? You must have had a better fuck than your wife? Tell me about it. I have girls coming in from Los Angeles at three o’clock. We can go upstairs and have a great time.”

Wolff also compares Trump to another famous womanizer: President Bill Clinton. According to him, a friend of both Trump and Clinton suggested two men were “eerily similar” when it came down to their morals, down to their similar strategies of “womanizing” and “harassing.” The only difference between the two, according to Wolff, is that Clinton has”a respectable front.”

“Even among world-class womanizers and harassers, they seemed exceptionally free of doubt or hesitation,” Wolff writes of both Trump and Clinton.

From Fire and Fury, here's Trump on his friends' wives –> pic.twitter.com/9imNBaSqm1

There’s also the matter of Trump’s relationship with Hope Hicks, his communication director. Hicks, one of Trump’s closest allies throughout both the 2016 presidential election and the administration itself, reportedly faced misogynistic remarks from the president while talking about her then-role as press secretary at Trump Tower. According to Wolff, Hicks was wondering how she could further help Trump handle the press when he suddenly commented on an alleged affair between former campaign manager Corey Lewandowski and Hicks.

in new book, author Wolff says Trump asked Hope Hicks, who had dated Corey Lewandowski, why she worried about Lewandowski's bad press after he got fired: "you've already done enough for him. you're the best piece of tail he'll ever have"

Wolff also describes the president as someone who “seemed to treat Hicks in a protective and even paternal way,” suggesting Trump sees Hicks as his daughter.

“Hicks was in fact thought of as Trump’s real daughter, while Ivanka was thought of as his real wife,” Newsweek quotes from Fire and Fury.

Disturbing.
"[Hope] Hicks was in fact thought of as Trump’s real daughter, while Ivanka was thought of as his real wife,”
https://t.co/P4qkvqah0u

Newsweek also points to various other instances where Trump targeted women. In one section, Wolff claims Trump developed an “obsessive antipathy for former Deputy Attorney General Sally Yates,” calling her “such a cunt.” He also describes Melania Trump as crying in misery during election night, with the president “visibly fighting with his wife, who seemed on the verge of tears” throughout the inauguration.

Granted, despite—or because of—the salacious details, Fire and Fury has been met with some criticism over the past week, with many pointing to Wolff’s larger history as a journalist. The New Republic, for instance, once described Wolff as someone whose scenes “aren’t recreated so much as created—springing from Wolff’s imagination rather than from actual knowledge of events.” Trump’s former deputy chief of staff is reportedly disputing a quote in the book, too.

Still, Wolff’s take on Trump’s behavior falls in line with his past, suggesting Trump is a man who treats women, at best, with very little respect whether he is president or not.