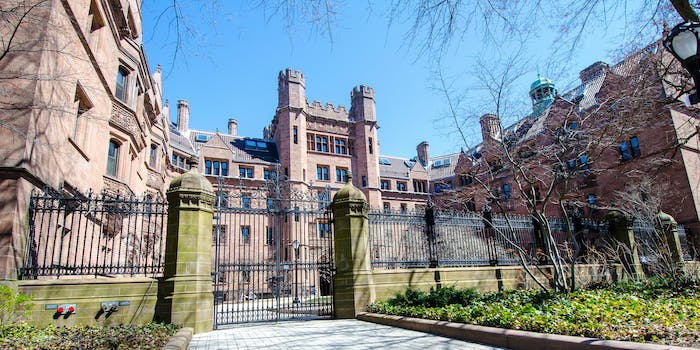 Department of Education is investigating Yale for discriminating against men

A man who's not a Yale student filed a Title IX complaint as a 'political hobby.'

The OCR is looking into multiple Yale programs geared toward women—including the Yale Women Faculty Form and the Yale University Women’s Organization—over allegations that these programs cater to women and fail to include men, Campus Reform reports. The investigation was launched after a complaint in February claimed that 17 different initiatives and programs unfairly provide scholarships, academic initiatives, summer programs, and degrees to college students and professors that leave men disadvantaged.

Interestingly enough, the complaint wasn’t even filed by a Yale student. Kursat Christoff Pekgoz, a doctoral student in English at the University of Southern California, sent in his Title IX complaint to the OCR even though he has no affiliation with the university. Pekgoz, who once identified as a feminist, regularly files Title IX complaints as a “political hobby,” and he believes affirmative action unfairly favors women while oppressing men.

“Yale University violates Title IX by funding/sustaining programs which practice discrimination in their admission/election practices,” Pekgoz said in his complaint, Campus Reform reports. “Men are a minority at Yale University (48%) and nationwide enrollment rates for men are even lower (42.8%). Therefore, affirmative action for women in colleges is irrational: indeed, it would only stand to reason to implement affirmative action for male students.”

Pekgoz originally outlined 17 different initiatives that “exclude or otherwise discriminate against men,” and the OCR began investigating seven of those programs on April 26. The OCR has since insisted that investigating Pekgoz’s claims doesn’t necessarily verify their accuracy, and the office has already dismissed allegations against some of the initiatives Pekgoz targeted in his complaint, including the Yale Women’s Center and the Department of Women’s, Gender and Sexuality Studies at the university, according to the Yale Daily News.

A Yale spokesperson has since told Campus Reform that the university is “committed to nondiscrimination on the basis of sex in all university programs.” That statement follows just a week after a white Yale student called the police after she found a Black student napping in a university common room.