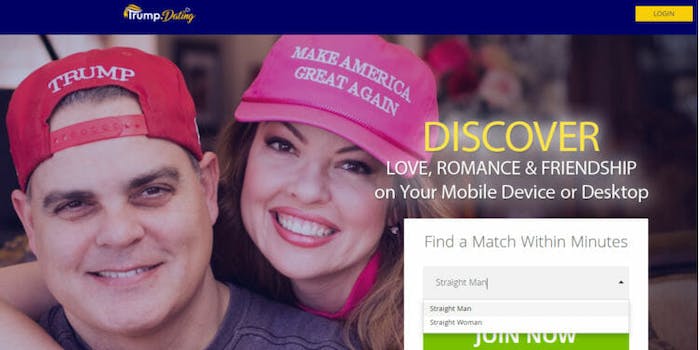 The face of Trump Dating is a convicted sex offender

The site has quickly been revamped.

A dating website for Trump supporters was apparently using a convicted sex offender to promote its promise to make “dating great again.”

Barrett and Jodi Riddleberger, a North Carolina couple and Tea Party activists, were chosen to be the faces of the site that launched right in time for Valentine’s Day. The site restricted registration to only those who identified as “straight man” or “straight woman” and allowed users to boast their brand of whiteness by choosing a very specific ethnicity from the options “Scandinavian,” “Mediterranean,” “Eastern European,” and “Western European.” While the site clearly had no room for non-cisgendered people, new reports highlight the fact that it had plenty of space for a convicted sex offender.

North Carolina news station WRAL reported on Monday that Barett was convicted of taking indecent liberties with a child in 1995. Then 25 years old, he made a sex tape of himself and a 15-year-old girl. Riddleberger’s offense is publicly listed on the state’s Department Of Public Safety site.

“I’ve already paid my debt for something I did 25 years ago,” Riddleberger reportedly told WRAL and would not comment further on the “past.”

The dating site has since adopted new faces, replacing the Riddlebergers’ photo with another brightly smiling pair of white folks. Hopefully, the site had a better vetting process for these two.