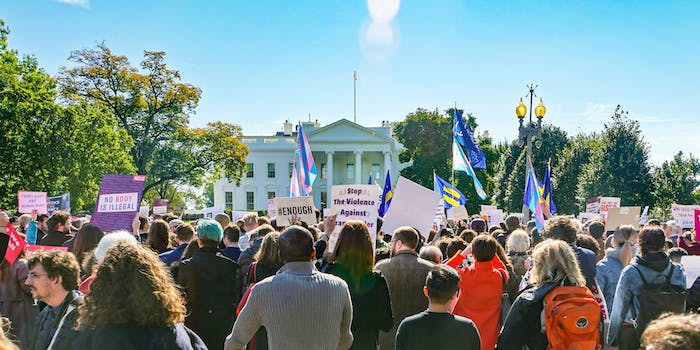 The U.S. Department of Health and Human Services removed 10 references to the term “gender” from the Office for Civil Rights’ “Discrimination on the Basis of Sex” webpage, according to a new report from the Sunlight Foundation. That discovery comes mere days after a New York Times story revealed the Trump administration plans to erase transgender people out of federal anti-discrimination protections.

The changes, which supposedly took place between Feb. 26, 2018 and March 5, show the HHS removed 10 references to the term “gender” in the phrase “discrimination on the basis of… sex (gender).” This coincides with the reportedly leaked memo, which would define gender through a person’s sex and genitals assigned at birth.

“The changes that the Web Integrity Project reports on often help explain the news; in this case, however, the news instead provides insight into the changes we’ve seen,” the Sunlight Foundation’s Andrew and Rachel Bergman report. “The memo described by the Times represents a formal initiative from an agency that provides a rationale for why the government might seek to alter the description of policies about sex discrimination on a public-facing website.”

The Trump administration also removed the term “gender” from its “Civil Rights for Individuals and Advocates” web portal, which previously said the OCR “enforces laws and regulations that prohibit discrimination on the basis of sex (gender).” That change appears to have taken place sometime between Jan. 23, 2018 and April 24.  Meanwhile, the page still references an injunction from Dec. 31, 2016, that prevents the OCR from enforcing the Patient Protection and Affordable Care Act’s Section 1557’s discrimination protections. Section 1557 lets the federal government enforce anti-discrimination protections based on gender identity in ACA programs and health initiatives receiving federal aid.

This isn’t the first time the Trump administration has edited material out of its official pages. Earlier this year, reports emerged that the Department of Health and Human Services removed information on queer women’s health from the Office of Women’s Health’s website. Several other changes have since been made, including the removal of a 14-page primer on the ACA from the Medicaid program’s official website. Like the administration’s sex-based discrimination changes, those edits were entirely unannounced, hinting at much larger concerns about the Trump administration’s policies toward marginalized Americans moving forward.