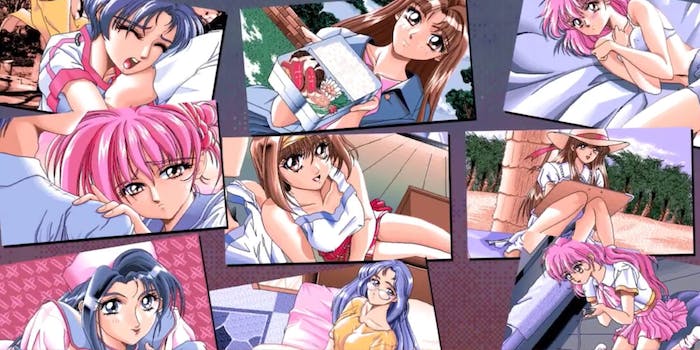 The game is set for rerelease as soon as this month.

Grady, a long-time fan of the original True Love, stressed Fakku’s rerelease has very few changes. “We’re purposely keeping the game as close to its original release as possible,” he said. “Our biggest addition at the moment is being able to play in windowed mode, and we are currently investigating other languages besides English.”

Japanese developer Software House Parsley released True Love ~Jun’ai Monogatari~ in June 1995. Part visual novel and part dating sim, the game follows a Japanese college senior living on his own and searching for a romantic partner in Japan. Players build up their skills as they go about their day, gradually getting to know the game’s women both personally and sexually.

True Love is a game filled with paradoxes. In Japan, the adult visual novel (or eroge) market was saturated with dating sims like Software House Parsley’s True Love. But when the game’s English localization was released in 1999, it gained a humble but dedicated following. Throughout the 2000s, True Love was frequently pirated by anime and manga fans, in part because its Japanese developer, publisher, and English publisher all went out of business. When Fakku announced it secured the rights to an official True Love rerelease, fans were stunned.

“You’re absolutely right it was not easy,” Grady said. “All of the Japanese companies involved in the game have long gone out of business. We had to trace the rights situation as it reverted through a few different parties … We have some incredibly talented partners in Japan that helped us work through the licensing puzzle, we definitely couldn’t have done it without them.”

Because Fakku secured publishing rights for a Japanese eroge title caught in licensing hell, fans presumed more classic eroge rereleases could arrive in due time. Grady hinted it’s a strong possibility. When asked if players could look forward to more PC-88 and ’90s era eroge titles, he suggested the sales of True Love ’95 would be the deciding factor. “If this game does well, you can definitely expect us to pick up more titles like True Love,” he said.

But despite fans’ concerns of a clash over rights, Grady said Fakku worked closely with The Asenheim Project on True Love ’95 and is interested in collaborating with the organizers again.

“They were a tremendous help reverse engineering the game so we could make modifications to this nearly 25-year-old title,” Grady told the Daily Dot. “We believe game preservation is a priority, and I want The Asenheim Project to continue doing what they do best. We would never request they pull this game or any other web publish, in fact we’d like to work with them to make their web version available on Fakku.”

If True Love is a success, it’s plausible that Fakku would go down a similar path. “I actually have been a big fan of [The Asenheim Project] for years, they’ve done really cool stuff and I’m down to support them more,” Grady said.

The Asenheim Project isn’t the only group that could benefit from Fakku’s hand. In September, Steam pulled adult visual novel series Taimanin Asagi from its store for an undisclosed reason (PC Gamer speculated it may have something to do with a character wearing a schoolgirl outfit). Grady told the Daily Dot that Fakku’s team spoke with Taimanin Asagi’s developer at Tokyo Game Show. While he did not comment on the censorship situation, Grady did hint that Fakku was open to help.

“Unfortunately I can’t elaborate much on Taimanin Asagi,” he said, “but if it doesn’t get on Steam it will certainly find a home on Fakku.”