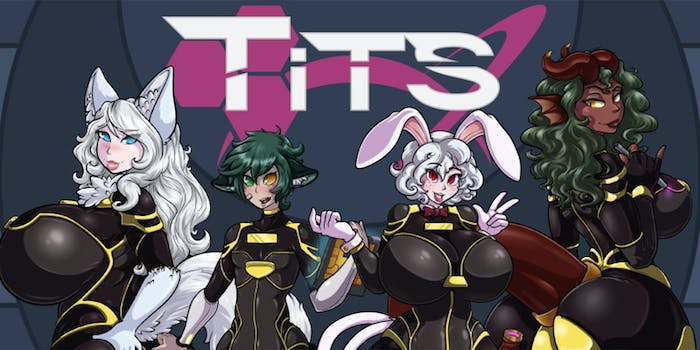 What is Trials in Tainted Space, the kinky sci-fi adventure game?

This deeply customizable adult space adventure is a fresh breath.

What is Trials in Tainted Space, and how can you get started? Here’s everything you need to know about this free sci-fi adult space opera.

What is Trials in Tainted Space?

Trials in Tainted Space—or, as it’s casually called among players, TiTS—offers some combat scenes and a map of sorts. This game is centered around exploration of a wide variety of planets, space stations, ships, and the various sexual encounters offered therein. Sexual encounters, by the way, mainly focus on alien creatures and bodily transformation.

Upon launching a new game, players are faced with their first choice: Who to be? All games begin with Captain Victor Steele, the wealthy head of Steele Industrial Technologies, carefully customizing the heir to his vast fortune. Players take on the role of this heir throughout TiTS.

Once you’ve made your character, the real fun begins. As a text-based game, Trials in Tainted Space relies heavily on your imagination to tell its story. The level of detail and description in this game is scintillating and enormous, as players work through an RPG-style adventure that spans a universe. Each new area houses characters to chat, fight, or fornicate with; levels of debauchery vary.

How you make your character and approach situations will all affect how interactions go, which means that each player gets a different experience from Trials in Tainted Space. This also gives a big boost to the game’s replayability, which is always a plus.

Is it available on Steam?

TiTS is not currently available on Steam. With the recent release of Corruption of Champions 2 on the digital gaming platform, fans are holding out hope the game will get an eventual Steam release.

Where to play Trials in Tainted Space

For now, players can download Trials in Tainted Space for free via Fenoxo’s personal blog. The page provides a number of options to players. If you’re hoping to avoid a download, the game is available to play in a separate window, or you can download either a ZIP install or a .swf file. SWF can still be used despite Adobe Flash’s early 2021 demise, so download the .swf and use any free flash emulator online.

If you go the ZIP route, you’ll unzip the folder and run the game’s executable. Double click the .exe, and TiTS should pop up immediately.

Players looking for special character builds and extra content can become backers on Fenoxo’s Patreon. Depending on their patron tier,  players can access pre-release alpha builds along with a monthly story exclusive to Patreon supporters. Considering the lowest level costs $5 monthly, it’s well worth the cash for interested gamers.

Mods for Trials in Tainted Space are relatively bare, but a number of cheats and exploits help to keep the game fresh for returning players. The majority of accessible cheats have been acknowledged by Fenoxo and are approved for public release. For the rule breakers among us, there are also save editing cheats. Read on for how these work.

Trials in Tainted Space offers numerous cheats that are easy to implement. For traditional players using a keyboard, simply type the cheat code into the codex console—which can be accessed under Options—at any time during gameplay. Players using a virtual keyboard must access a text input box and insert the cheat code therein. As noted on the game’s list of cheats, not all cheats are compatible with this route.

Once you’ve figured out how to input them, there are myriad cheat options that will give a big boost to your next TiTS game. Players looking for rapid level-ups can get a sudden windfall of XP or a massive payday. You can also unlock every planet in the game without a moment’s legwork, teleport yourself to a desired location, reset quest progress, or enable passive skill gain.

A far more complicated route allows players to modify their TiTS game file. If you’re not already familiar with the process, it may be wise to stick with the far simpler cheat codes. If you really want to try your hand at full-on cheating, however, you’ll want to download .minerva, a shared object editor.

Once you’ve got .minerva on your computer, you’ll need to locate and manipulate your TiTS save file. A skilled cheater can change almost anything about their TiTS experience—but with no promise of a functioning game. Proceed with caution.

For more information, read through the Trials in Tainted Space wiki’s save editing guide.