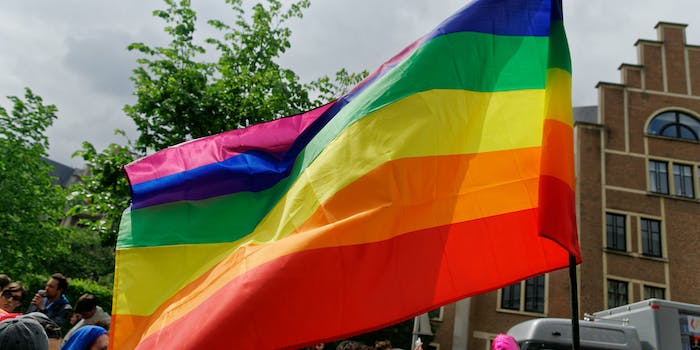 The group is 'making male and female Bi again.'

If you’re running a transphobic organization, it wouldn’t be a total surprise if you accidentally tweeted your ineptitude about trans issues to the masses. It also wouldn’t be surprising if someone parioded your bigtory.

Binary Australia is the rebranded name of “Marriage Alliance,” an Australian lobbying organization that previously fought against legalizing gay marriage in the nation. The group has since switched focus to “traditional values” among “the inherent differences between boys and girls, men and women.” In short, Binary Australia is trying its hand at transphobia instead.

But Binary Australia may be off to a troubled start online. A Twitter account named @BinaryAustraya emerged on Tuesday, supposedly tweeting internal text messages from one employee working with the group. This apparently came as a surprise to the “employee,” who tweeted “What? My SMS is showing on the Twitter feed? I don’t know how to turn it off.”

This didn’t seem to stop him, and he published over five dozen tweets across three days.

“Look don’t worry. I’ll delete the tweets in the morning,” the employee tweeted. “We’re not going to be a laughingstock because of our Twitter account.”

Among other things, the Binary Australia account tweeted about “giving up on marriage,” all of its budget being spent on a website, storming up a counter statement to the trans-inclusive Australian Psychological Society, and to “keep making [its campaign] about the parents and their concerns over losing control” of their children.

The so-called employee even wrote about a first date that’s “going ok,” except for the fact that “she’s Catholic.”

The @BinaryAustraya account quickly went viral after musician Alyssa Kai captured the entire saga in a Twitter thread. However, it seems unlikely that @BinaryAustraya is the real Twitter account for Binary Australia. For one, the tweets are just a tad too comedic and outlandish. They don’t accurately reflect how people talk over text message and how Twitter tracks text messaging.

Nor are its tweets actually being posted from a smartphone. As Twitter user Cuniiform revealed, the Binary Australia Twitter account’s tweets are sent in from the Twitter Web Client, not an SMS-based posting system.

Tweets tell you where they come from pic.twitter.com/paD1pbwNek

And the tweets from @binaryaustraya (who’s message I don’t support at all, fuck them lol) are from Twitter Web Client. Meaning someone or something typed something in to the website aiche tee tee pee ess colon slash slash twitter dot com, which is unlikely if its automated pic.twitter.com/JG43KLYGr4

Then on Thursday morning, Kai said she was “taken in by a good ribbin’,” deleted the thread, and called the Twitter feed a “parody account,” essentially putting the entire story to rest. The Daily Dot reached out to the Twitter account to confirm, but hasn’t heard back as of this posting.

Which is a shame, because the entire kerfuffle was hilarious in its own right. Case in point, the “employee” running the Twitter account tweeted that work “has been a bit of a viper’s nest” because “they’ve been constantly calling me for the last hour or two. :(.”

“Session is for 8:30 so we can get drinks and snakes [sic] beforehand. I can use some after today,” the employee said.

Hopefully, at any rate, Binary Australia’s fake Twitter saga is putting the real organization on watch.