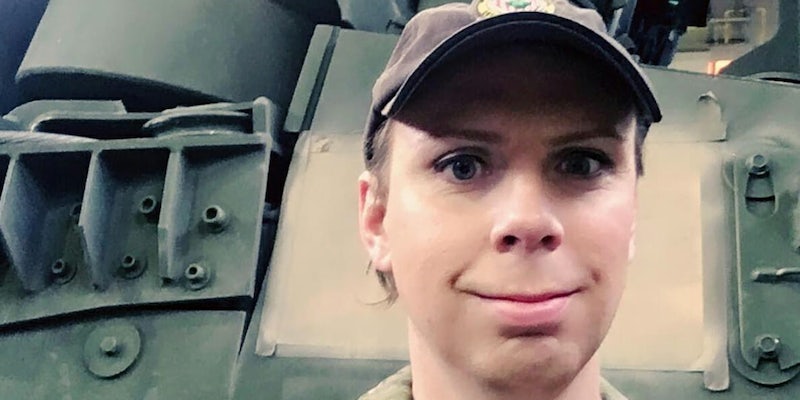 'We are still here and moving forward.'

Following Trump’s address, Kennedy will deliver the Democratic Party’s rebuttal speech from Massachusetts. King, meanwhile, will be in the House Chamber facing the president whose policies have tried to block her from serving in the military.

Happy Monday everyone. We are working on the stryker today and happy that our heat is working on a cold PNW morning. #infantrychick

Kennedy, who is chairman of the Congressional Transgender Equality Task Force, said in a statement that King represents “the best and bravest our nation has to offer.”

“For nearly two decades, she has valiantly served our country and defended not only our safety, but our values at home and abroad,” he said. “Although I won’t be able to join her Tuesday night, I know that she will make our Commonwealth and our country proud at the State of the Union.”

In August, Trump issued a memo to the Pentagon detailing a ban on transgender people serving in the military. However, the ban was blocked by federal judges, and since Jan. 1, transgender soldiers have been able to enlist. Existing transgender members—like King—have been protected from being discharged, NBC News reported.

“I want them to see that in spite of everything they may be going through, we are still here and moving forward,” King said of her attendance at the State of the Union. “Equality is something we should never give up on.”

At the airport, heading to Washington DC for the #stateoftheunion what an honor. Thank you to Congressmen Kennedy for this amazing experience.