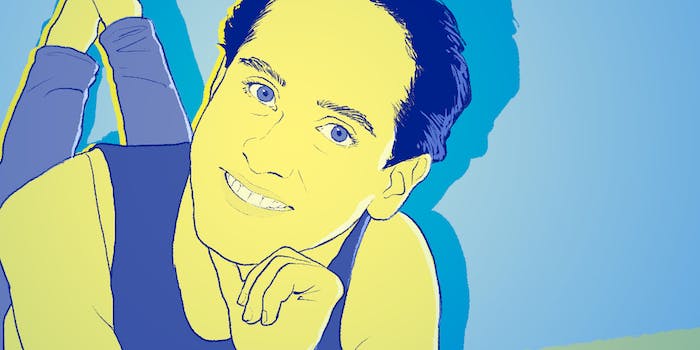 For this transgender Orthodox Jew, blogging was her lifeline

Abby Stein didn't use the Internet until she was 20.

In May of 2012, tens of thousands of ultra-Orthodox Jewish men filled New York City’s Citi Field. They had not gathered for a Mets game or a religious ritual, but instead to hold a rally protesting the Internet. The New York Times covered the event, writing, “For the attendees, many of whom said they came at the instructions of their rabbis, it was a chance to hear about a moral topic considered gravely important in their community: the potential problems that can stem from access to pornography and other explicit content on the uncensored, often incendiary Web.”

Women were banned from the anti-Internet rally, in accordance with the ultra-Orthodox custom of gender separation. But at least one woman, Abby Stein, was among the attendees. Three years later, Stein would publicly come out as transgender and begin living as a woman, but at Citi Field, she presented with the same dress and physical appearance as the men in attendance.

“I was at that gathering, but with my smartphone,” Stein said with a laugh, in an interview with the Daily Dot. “I wasn’t religious anymore, but I was still living in the community.”

Stein, age 24, was raised in a prominent family within the ultra-Orthodox community. She belongs to the Vizhnitz dynasty, a lineage of distinguished rabbis that traces its genealogy back to Rabbi Yisroel ben Eliezer (more commonly known as the Baal Shem Tov), the Jewish mystic who founded Hasidic Judaism. Stein’s family and placement within the community meant that her upbringing was very traditional and insular; the first time she ever used the Internet was when she decided to adopt a secular lifestyle at age 20.

“The way I heard of [the Internet] was because the rabbis started fighting it,” Stein told the Daily Dot. “Every speech, every letter, everything they would do they would say, ‘Internet, Internet, how bad it is.’ But this is how I heard of the Internet to begin with.”

For all of the problems that may be attributable to the Internet, one positive effect is undeniable: members of marginalized communities—including the LGBTQ community—have been able to access resources, connect with each another, and gain comfort in their experiences and identities in unprecedented ways. Many LGBTQ people have come out on the Internet prior to coming out to friends and family in their daily lives, sensing that the anonymity and safe community spaces online would aid in their processes. The Internet also allows those just starting to question their sexual and gender identities to easily gain information about everything from safer sex practices and general health care to coping with discrimination.

As a young trans woman questioning her gender identity while living in an insular culture, Stein effectively lived in the dark. “I didn’t know anything about why I felt the way I felt,” she explained. “I always say I didn’t really struggle that much with identity—I very much had a strong feeling of who I am, of being a woman. It just didn’t add up. And I didn’t know any other people like that who were like me.” 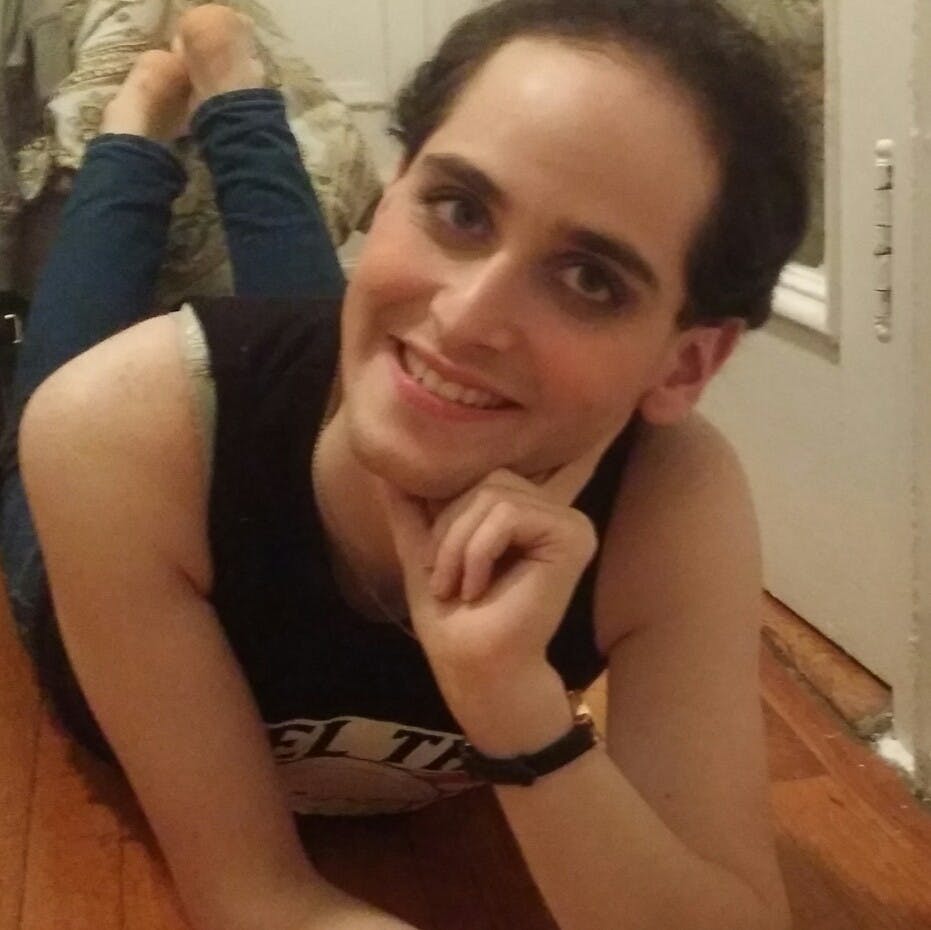 When Stein started exploring the secular world, accessing the Internet was an important first step. At the time, Hebrew and Yiddish were the only languages she spoke, and she only used online forums to seek out answers theological questions and connecting with other Jews who were questioning their faiths. By the time of the rally at Citi Field, Stein had joined Footsteps, a Jewish nonprofit that helps religious Jews transition from life in the ultra-Orthodox community to more secular environments. Gradually, she began to expose herself to the many forms of media that had been forbidden to her for so many years; the first English-language television show she binge-watched was How I Met Your Mother.

Writing a blog is another activity that drew her to the Web. In August of 2012, she began a blog about her journey out of ultra-Orthodox Judaism. After having had to keep her questions about faith hidden for so many years, she saw blogging was a source of liberation:

“[Blogging] helps me to get out my feelings, get out my emotions. [When I started] I was mainly writing for my own sake. It really helped me articulate what I think, to get my thoughts out. I like to get feedback sometimes—although there’s a lot of hate, there’s always good advice. I found it really helpful for myself. Writing always helps.”

While opening up about her choice to become secular was itself a challenge, coming to terms with her identity as a transgender woman was an even harder for Stein. After becoming accustomed to the openness and accessibility of the Internet, she broadened her searches online and began to find the information about trans identity that she had lacked for so long. In the summer of 2013, Stein posted in an online forum for trans people. It was the first time that she consciously admitted to herself—and to others—that she was a woman. Though it would still be two more years until Stein came out publicly, she recalled knowing that, “at that point, I was already pretty aware that this was who I was and this was what I had to do.”

“If I would’ve known when I was 12 that there were other people like me, it would’ve helped a lot.”

A breaking point came in July 2015: She was in a deep depression and unable to leave her house when she went online and found Trans Lifeline, a helpline for transgender people in crisis. She ended up chatting with a Lifeline volunteer for three hours. After that conversation, she finally decided to come out to a therapist and seek support at New York City’s LGBT Community Center. A month later, Stein began her second blog, aptly titled The Second Transition, about her journey as a transgender woman.

It didn’t take long for Stein’s honest and vulnerable writing to hit a nerve with other LGBT Jews, and when those affected by her words began to reach out to her, she realized the full extent of her impact.

“My first blog post on the new blog was in the last week of August this year,” she said. “There weren’t that many views, and when I started it, it was still anonymous. But a few people reached out to me—people who were in this community and were struggling with their gender identity. And that’s when I realized that there’s a lot that can be done.”

Though it is impossible to know the precise number of religious Jews who identify as transgender, there is a small but important population of trans Jews who have chosen to leave communities like Stein’s. Since Footsteps was founded in 2003, the organization has helped over 1,100 people leave ultra-Orthodox Judaism and they estimate that 20 percent of their members identify as lesbian, gay, bisexual, transgender, or queer. Suddenly, some of those people began to stumble upon Stein’s blog, contacting her in solidarity and seeking support.

The initial messages that Stein received made her reflect on her youth, and she realized the unique role she would be able to play in making a difference. When people in ultra-Orthodox community struggle, “the community ignores it,” she explained. “I could have an opportunity to change that and start a conversation,” she continued. “I was not expecting to get any acceptance from an ultra-Orthodox community by now, but I know for myself that if I would’ve known when I was 12 that there were other people like me, it would’ve helped a lot.”

On Nov. 11, Stein took the next big step and publicly came out as transgender on her blog. She wrote:

“One of the first things I remember about myself, is thinking, Hey I am not a boy. this thought, feeling, confliction, confusion, realization, is something that never left me. I had – as I figured out at the age of 20 – what’s called today (and no, I don’t like this ‘diagnose’) ‘Gender Dysphoria’ that is, when the gender assigned to an individual on their Birth Certificate is not who they are.”

In the post, she shared the ups and downs of her journey, pausing to thank the individuals who have helped her along the way: her friends; her roommates at Columbia’s Jewish co-op; the members and facilitators of the Gender Identity Project at The Center; the rabbis at her synagogue, Romemu; and her doctors at the LGBTQI health clinic APICHA. She ended the piece with a supportive message for other transgender ultra-Orthodox Jews—”You can do it!”:

By coming out publicly as transgender, Stein hoped to get her community talking. “I thought that, because of my family status, people would probably talk about it,” she explained. “And this is exactly what happened. It just went above and beyond any of my imagination.”

In the first 24 hours after Stein published her coming out post, her views on Blogger jumped from 1,200 to 20,000. Five days later, she started a private Facebook group for other religious Jews coming to terms with their gender identities, many of whom directly contacted her after discovering her blog. Stein says that the group currently has 20 members, and, given its intimate size, “it’s very active—there are a few new posts every day.” Later in December, she will host a trans meet-up with Eshel, an Orthodox LGBT organization.

Stein has also found acceptance and support within the Jewish Renewal denomination. Jewish Renewal services incorporate much of the mysticism, charismatic music, and deep spirituality that are often associated with the Hasidic movement, but the denomination is also one of the most progressive within Judaism. Its statement of principles promises that the movement “welcome[s] and recognize[s] the sanctity of every individual regardless of sexual orientation or gender identity,” and Stein has found this welcoming to be true in her experience: “You can come dressed as if you’re going to a wedding, you can come dressed as if you’re going to the beach—no one cares. You can be whatever you want.”

Though Stein is now a public figure within the LGBT Jewish community, she isn’t allowing the surge in publicity to alter her life too much. She is still pursuing a bachelor’s degree at Columbia University, and won’t speculate about where her journeys in Judaism and trans identity will lead her. But while her ultimate destination remains unknown, she’ll continue documenting her process as it unfolds.