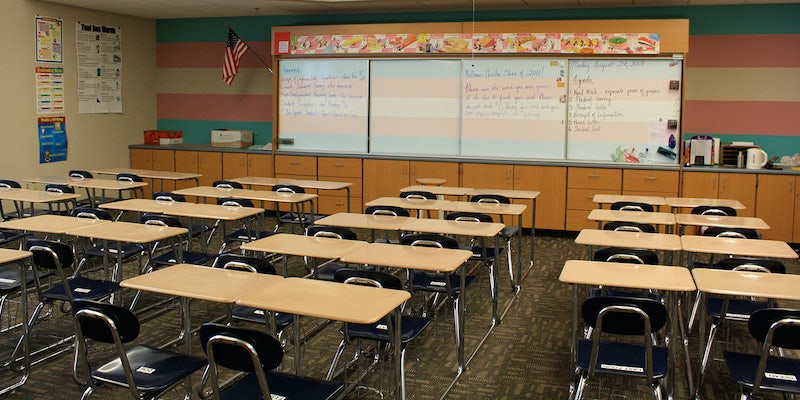 On Monday, more than 100 students at Missouri’s Hillsboro High School walked out in protest of a transgender teen who asked to be allowed to use the girls’ locker room to change for her gym class.

A small portion of students also walked out in support of 17-year-old senior Lila Perry, who dropped the gym class in response to the controversy.

The Monday walkout was only the latest scuffle over whether Perry should be allowed access to the girls’ locker room or made to change in a separate, unisex bathroom instead. On Thursday, a school board meeting addressing bathroom and locker room rules for trans students drew so many parents it had to be moved to the gymnasium.

“With using the staff bathroom, I felt like I was being segregated off,” Perry told St. Louis’s KTVI on Thursday. “Here are the boys, here are the girls, this is me. And I didn’t like that. I wanted to blend in with all the other girls.”

Superintendent Aaron D. Cornman gave a statement to the St. Louis Post-Dispatch that said the district “respects the rights of all students and appreciates the fact that the students we are educating are willing to stand on their belief system and to support their cause/beliefs through their expression of free speech.”

Speaking to reporters on Monday, Perry said that she was growing weary of the conflict.

“I’m hoping this dies down,” Perry was quoted as saying by the New York Times. “I don’t want my entire senior year to be like this.”

On Twitter, some spoke out in support of Perry while others applauded the protesters and misgendered Perry while implying she wasn’t a “real” girl.

I know a girl who attends a Hillsboro school. She left school to protest Lila Perry, a trans student use of her bathroom. Go real girl go!

On Facebook, some of the comments were even worse. One Arizona woman posted the news with a caption that revealed an utter ignorance of basic transgender issues, calling Perry a “boy” who was “running around a girls bathroom dressed as a women (sic).”

Perry herself used Twitter to call out to transgender icon and activist Laverne Cox for help.

Protesters outside the school on Monday said they were concerned about the privacy rights of the female students. One parent (whose child does not attend Hillsboro High) stood on the sidelines with a sign reading “Girls Lives Matter.”

According to Perry, school administrators have treated her with respect and have allowed her to use the facilities that are marked for girls. But if that policy should change, the school could find itself in trouble with the U.S. Department of Education’s Office of Civil Rights, which said in 2014 that denying a transgender person access to the bathroom or locker room of their choice is illegal sex discrimination in violation of Title IX.

On Friday the Missouri GSA (gay-straight alliance) Network will rally at the school in support of Perry. On a Facebook event page for the rally, the group posted a statement saying that “transphobia does not belong in our schools or communities.”

“Young people, including trans and gender non conforming young people, have the right to education with dignity and equity,” read the Missouri GSA Network statement. “We are here to show Lila and other trans students around the state of Missouri and around the county that we lift them up when others might try to bring them down.”