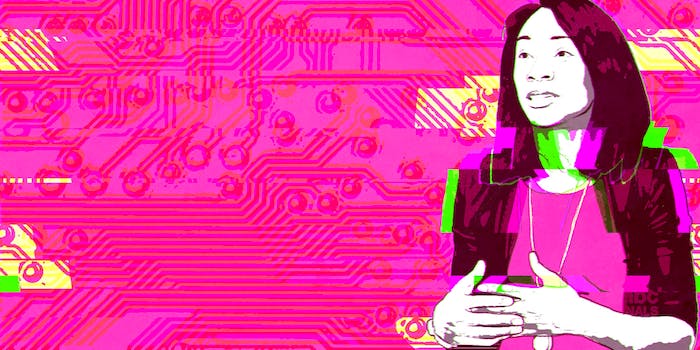 So far the company has helped more 250 trans people worldwide.

However, a black trans female entrepreneur hopes to change that.

Angelica Ross, 35, businesswoman and actress on the web series Her Story, founded TransTech Social two years ago, following frustrations and limitations at her previous job. She felt her work there was being co-opted by some of her colleagues and that she was tokenized in her role developing employment for transgender people.

However, Ross created TransTech not only to help trans people get jobs, but to also instill in them self-worth and value, which is something she has learned along the way.

Ross recalls being a younger trans woman and “accepting” that the only way she could survive or transition was by becoming an adult entertainer or a showgirl.

“My personal journey went from thinking all I had access to was sex work to ‘I don’t have to escort, and I don’t even have to pose on these websites,'” Ross told the Daily Dot. “I can actually build the website. I don’t have to be exploited by another photographer. I can take my own pictures and exploit myself, put a paywall on it, manage my own website, make a business around that—and I did.”

Yesterday Miss Ross took off the CEO hat and got in on the fundraising herself! We have raised over $5,000 but we have a long way to go! Please go to IndieGoGo.com and search for TransTech! Our fall session is right around the corner! #transtechchicago @transtechsocial #trans #tech #chicago #empower #educate #employ #girlslikeus #selfmademan #entrepreneur #transgender #LGBTQIA #LGBT

A post shared by TransTech Social Enterprises (@transtechsocial) on Sep 11, 2014 at 6:10am PDT

As for donations to help with sustainability, TransTech has received a $10,000 donation from MillerCoors every year since its opening. The startup also received contributions from the Human Rights Campaign, which gave more than $30,000, and the Latin School of Chicago, which donated computers to the program.

Although the company is thriving, like any startup, it has its struggles. However, some of these challenges are specific to the marginalization and trauma trans people face on a daily basis.

Ross points out to her members she is not a social worker. She’s a businesswoman who also happens to be an informed advocate on the trauma the trans community faces. But she says some people fail to realize TransTech is still a place of business.

“We ran into some challenges because everyone wants me and [the company] to be this goodwill place that just pays people to give them a shot,” Ross said. “But when I’m standing here with a client who is expecting a deliverable, and expecting productivity, it’s hard to tell them that someone is having a mental health day, or that all these other challenges are going on. It’s pushed us to a very challenging place to figure this out.”

Ross says there are many educated and qualified trans people who are ready for the workforce but have been locked out. And then there are others who might not have the experience (again, because they face extreme discrimination in the workforce and within society), but only need training and polishing to accompany their drive and know-how.

Apprentices from TransTech have gone on to build websites for clients like the black social-justice organization BYP 100, and have worked on the Trans 100 booklet and campaign, according to Ross.

In the future, Ross hopes members will become anchors to the startup, partners who will help with donations and business initiatives.

“In order for us to solve this issue with the trans community having equity and a stake in the game, there’s a responsibility of rolling up your sleeves that has to happen from everyone,” Ross said.