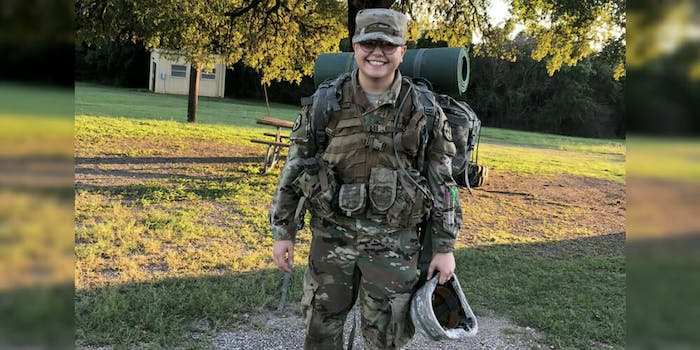 He may not be able to afford his college education.

Thanks to Trump’s transgender military ban, a freshman at the University of Texas at Austin has lost his Reserve Officers’ Training Corps scholarship, and may not be able to continue schooling.

Map Pesqueira is in his first year of college, but thanks to the trans military ban, which went into effect on Friday, it may be his last for a while. Pesqueira had planned to get a degree in film and serve in the military after graduating college and was awarded a national three-year ROTC scholarship. However, when the trans military ban went into effect on Friday, the Department of Defense voided Pesqueira’s scholarship, leaving him without the funding he’d counted on to get his education.

“Since I’ve already had top surgery, hormone replacement therapy, gender marker and [a] name change, I can’t go in under this policy,” Pesqueira said to the Daily Texan Online. “I really do see [Trump’s policy] as a waste of resources, money, time and personnel. It’s made figuring out my future education so much harder.”

Pesqueira said UT’s Army ROTC department chair, Matthew O’Neill, tried to help him keep his scholarship by seeing if he could be “grandfathered in” but was unsuccessful. As word of Pesqueira’s predicament has spread, politicians and LGBTQ rights organizations are speaking out in support of him. Texas Congressperson Joaquin Castro said on Twitter that universities should make up the difference for scholarships that have been eliminated for trans students, saying, “It’s not the students’ fault they’re losing these scholarships.”

I hope he perseveres. No one who would lay their life down to defend a country that would see them stripped of their identity should be treated this way. Trans service men and women deserve better than this.

Pesqueira has set up a GoFundMe campaign to try to raise the money needed to attend UT Austin for his sophomore year—$20,000. In a little under a week, he has so far raised $8,000. Pesqueira said that losing his scholarship has had a major negative impact on his life and that he’s trying to get “back on a clear track, but that may or may not happen.”