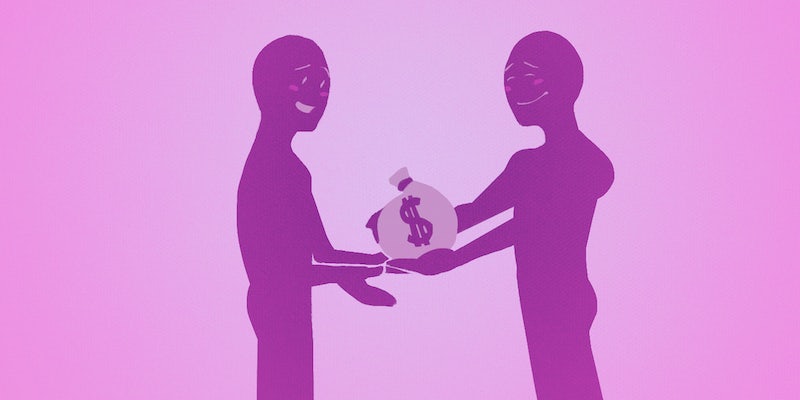 A new foundation aims to close the gaps between the LGBT movement and the sex business.

Sex work can be a contentious issue in the transgender community. On one hand, trans women are frequently profiled as prostitutes while simply walking down the street. On the other hand, the sex industry has provided a haven for many trans folks who face endless cycles of discrimination when seeking other types of work.

According to a TAIF press release, housing, call centers, emergency shelters, and advocacy as some primary areas of need, “with a specific focus on the needs of the performers in our community.”

And it’s not just the LGBT movement. Stryker said she has repeatedly run into the “dirty money” stigma in academia as well. When asked to speak at the University of New Hampshire in 2013, she recalled, a conservation group created an uproar asking whether the school’s purchase of Stryker’s plane ticket was akin to hiring a prostitute.

“No organization will say directly why they won’t consider you as a spokesperson for the community,” said Lee of her own experience. “It’s not as if they don’t understand or empathize with our circumstances. They simply want to… put what they think will be the best foot forward for their cause.”

It’s clear from the numbers that Grooby (the company) is in a position to funnel large amounts of cash back into the transgender community. But when Grooby tried first to sponsor Trans Lifeline, and later to donate proceeds from its annual calendar to the Transgender Law Center, it was rebuffed. Why? Because both organizations felt that Grooby’s use of the term ‘shemale’ to market its content was unacceptable.

“Our Executive Committee checked out your sites and some members raised a concern that ‘shemale’ was fairly ubiquitous not just in the URLS, but in the content inside the pay wall,” wrote Trans Lifeline’s board chair Christina A. DiEdoardo in an email to Grooby this spring, which the company posted on its blog. “After multiple internal meetings and some very spirited argument on all sides, we have reached a decision that  we will not be able to work together with you as a corporate sponsor at this time.”

Trans Lifeline also requested that Grooby delete a banner on its site that directed users to donate to Trans Lifeline, to which Steven Grooby responded with outrage.

“So how many more calls will be missed because you don’t have the funds to staff the phones?  What happens when a trans person harms themselves because they couldn’t reach out and talk to someone?” asked Steven Grooby in an email response to the Trans Lifeline board. “Personally, I’m incensed that you would allow personal issues to get in the way of genuinely being able to help people.”

Steven Grooby has repeatedly used these numbers to defend his marketing—to suddenly switch over from ‘shemale’ to ‘transsexual,’ much less ‘transgender,’ would kill his business in one fell stroke, putting thousands of models out of work.

“Personally I believe that by requiring their models to accept that kind of terminology, that is a violent act,” said Stryker. “I feel like Grooby creates and perpetuates a world in which trans women are not treated as women, are ‘other’-ed. And Grooby’s defense of that is that it’s marketable. Which is bullshit. There’s something to companies asking performers to use the terminology that they prefer.”

“Transgender Law Center and Trans Lifeline condone neither the state’s criminalization of sex work nor the use of transphobic slurs,” read the one-line emailed statement.

“I think when it comes to words like ladyboy, shemale, tranny… it’s all about the context in which you use those words and who you say it to,” said Yasmin Lee. “There are many words that I deem appropriate for one friend but not the next, based on my relationship with each. I understand that the term shemale is associated a lot with porn. I wouldn’t go to another trans woman and call her that. I would be very offended if a random stranger… would cross that boundary and refer to me other than by my name and preferred pronouns.”

Lee also pointed out that the sex industry has been around a lot longer than the burgeoning, and slowly mainstreaming, movement for transgender civil rights.

“Long before the Internet and this social storm, this abandoned group was kept alive by the girls that walked the street,” Lee said. “Without that, the world wouldn’t even know we existed.”

Buck Angel said that Grooby would be committing “business suicide” if it ceased the use of the term ‘shemale.’ He also said that any outreach organization that refused to take money from him is “full of shit.”

“You’re saying our money is not as good as someone else’s money, when you’re basic goal is to save lives? And the only reason you aren’t taking our money is because of the use of words? That makes it seem like you’re lost the focus of what your goal is,” Angel said with palpable frustration in his voice. He also stressed his belief that the more often slurs are used by LGBT people, the less hateful they become.

“The sex industry is about money and sex, let’s not kid ourselves. You have to play a game. Those words might be offensive in the real world, but the sex industry is a fantasy world,” said Angel.“It’s the same way with [words like] ‘queer,’ ‘dyke,’ ‘fag.’ I call myself a tranny all the time and so do lots of my trans friends. We empower these words by taking them away from people who use them against us.

Controversy over ‘shemale’ aside, money is desperately needed in the transgender community. According to the largest community survey ever compiled, 2011’s National Transgender Discrimination Survey, about a third of transgender people have annual incomes of less than $20,000. The trans population is four times more likely than average to live in extreme poverty (making less than $10,000 a year), and job discrimination is rampant. With twice the rate of unemployment as the rest of the U.S. population, a distressing 90 percent of those surveyed said they had experienced harassment, mistreatment, or discrimination at work because they were trans.

Grooby’s marketing director Kristel Penn said that not only does the company work with trans models, there’s also two trans employees. Penn herself identifies as “lesbian or queer” and says she personally cares about the lives of the models and performers she works with.

“You see things like trans people having problems with emergency services like housing and healthcare. We want to give back to the people that have made us successful,” said Penn. “[TAIF] is a good incentive to encourage other companies in our industry to donate, too, and centralize donations and maximize the ability to help.”

“I know one woman who’s been in the industry for a long long time,” said Angel. “This person contacted me and said ‘Buck, I’m in poverty now. I can’t get a normal job, I don’t have any skills.’ Now I’m thinking if we could help train people with job skills for when they need to go to a 9-5 job. A lot of the girls are scared or nervous about that.”

Update: 10:18 A.M. CT, Sept. 8: This piece has been updated to reflect that the founder of the Grooby network of sites is Steven Grooby.